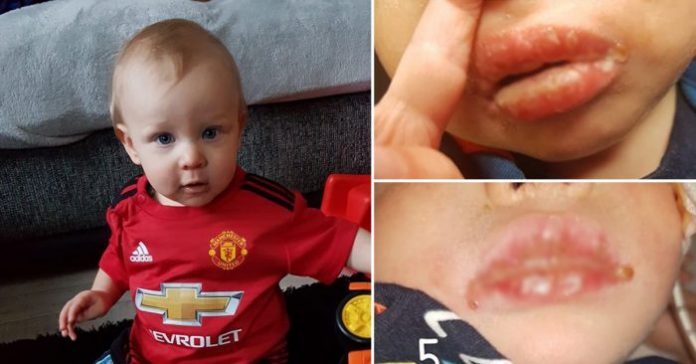 Children are easily vulnerable to illnesses and diseases as their immune system is still in the development stage. Even the slightest cold could turn deadly if disregarded.

One year old Ellis had his life hanging on a thin string when he was diagnosed with HSV-1 infection. Medically known as Herpes Simplex Virus Type 1, the oral herpes is generally contracted from direct and indirect touches. The symptoms include cold sore and high fever, as well as blisters around the mouth and genital area.

HSV-1 can be cured on its own if the person infected has no traces of immunodeficiency. Unfortunately, little Ellis had a rather low immune system, which only made it worse.

His mother, Charlotte Louise Jones posted a PSA on Facebook to alert people on the consequence of their seemingly harmless acts – like kissing and touching babies.

” People really don’t realize how a kiss or a touch from someone with a cold sore can be life threatening for a little body”, she fumed.

Together with the post, she shared images of Ellis from when he was healthy to when he had the first few symptoms and eventually his final condition.

When he was first brought to hospital, the doctors diagnosed him for tonsilitis which later evolved into severe ulcers and rashes.

Devastated that her young child’s condition only deteriorated by the day, she visited the doctor yet again. After running through multiple tests, it was finally discovered that what Ellis had was oral herpes.

The concerned mother went on to share the details of her son’s recovery, mentioning the continuous medication and food inhibition he has to go through. She was also grateful that Ellis was able to endure the strenuous procedures but the same couldn’t be said for babies with compromised immunity.

Charlotte ended her post by urging the public not to kiss babies when they’re unwell and to sanitize well before touching the little ones.