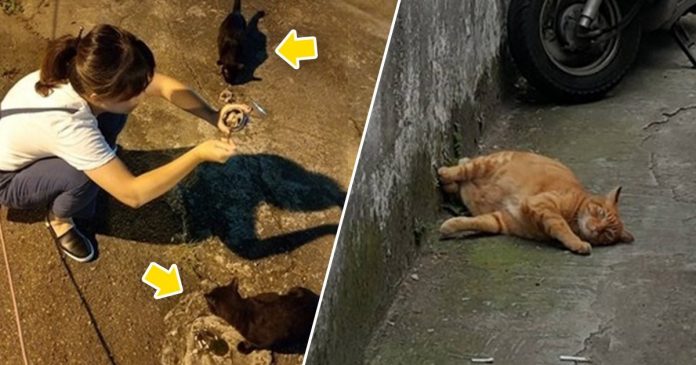 A Taiwanese woman was at her wit’s end when she realized that her pet cat had gone missing for days. In an attempt to search for her missing cat, she put up posters and even lodged a police report but it was only later that she realized she just had to ask for help from a stray cat to find her pet.

According to ET Today, the cat owner who was identified as YiFen Tan shared her bizarre story of how she ended up asking for help from a local stray cat to find her missing cat on social media.

It began when Lulu, her orange tabby cat, did not return home for several days, prompting YiFen to look for the feline all over the neighbourhood

She even decided to put up posters and lodged a police report over Lulu’s missing.

However, all of her efforts were in vain as she failed to find Lulu

Despite a few days had passed since Lulu was missing, YiFen continued searching for the cat around her neighbourhood.

That was when she saw a black stray cat staring at her while she was shouting Lulu’s name.

She even rattled the canned food that she was holding, asking the cat if it knew the whereabouts of Lulu.

The black cat seemed to understand YiFen’s plea to help her find Lulu that it later started walking as YiFen followed it from behind.

The black cat then stopped at a parking lot, about 500 meters away from where YiFen first saw her.

YiFen who was joined by her friends then shouted Lulu’s name near the parking lot and to their surprise, they finally found Lulu!

Apparently, Lulu was hiding in a corner near the parking lot and was taken care of by another black cat who also appeared alongside Lulu when they shouted her name.

As YiFen felt grateful for the black cats who had helped her find Lulu and taken care of her cat while Lulu was away from home, she decided to adopt the cats by luring them into a cat carrier.

However, the black cats refused to be adopted and only accepted her canned food as a token for helping her find Lulu before quickly running away after they finished the treat

According to YiFen, she decided to feed the black cats from time to time after the incident to repay for their kindness

Earlier this year, Japanese Twitter user @charlie0816 shared his story about asking for help from the cats in his neighbourhood to tell his missing cat to return home as soon as possible.

While many were skeptics about his luck and the timing was just a pure coincidence, many cat owners had since proved that the bizarre method actually worked just like YiFen’s story!

Just in case if your cat goes missing in the future, you now know who you should turn to.