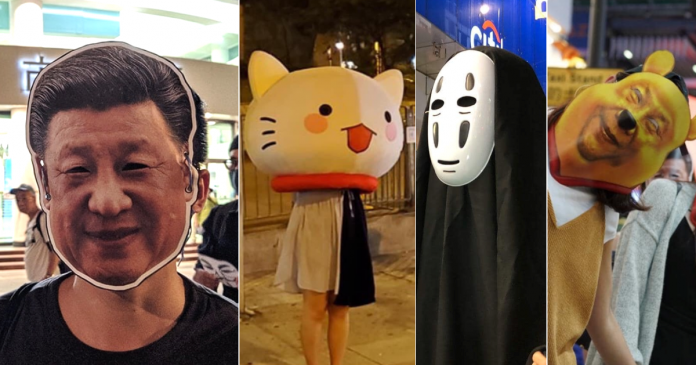 While their Southeast Asian neighbours in Palembang wear masks due to the apocalyptic haze brought to life in the region, residents in Hong Kong, too, don masks as they go about their daily routine, but for a different reason.

The anti-mask law came into effect on Saturday, October 4, as announced by Hong Kong’s chief executive, Carrie Lam, the day before.

According to the Hong Kong Free Press, individuals who are found to violate the ban can be penalized a fine of HK$25,000 (US$3,200) and one year in jail.

However, the Hong Kong government’s latest ban on face masks appears to have no effects whatsoever as pro-democracy protesters continue to rally on the streets masquerading as various fictional characters like Winnie the Pooh and Guy Fawkes

While Winnie the Pooh is popular as a beloved Disney character in many parts of the world, the cartoon character is banned in China as Chinese internet users have joked that the Chinese president Xi Jinping resembles the bear

Face masks have been an integral part of demonstrations in Hong Kong since the beginning.

According to Vox, it not only protects protesters from tear gas and serves a symbolic purpose of a demonstration but also guards their real identity from being recognized on CCTVs around the city which could be used to identify and arrest them.

While the anti-mask law seems to have worsened the political unrest in Hong Kong, it seems like the protesters are having fun at donning cartoon character face masks in response to the latest ban

Here are some of the cartoon characters face masks worn by pro-democracy protesters on Friday night before the anti-mask law came into effect the following day: