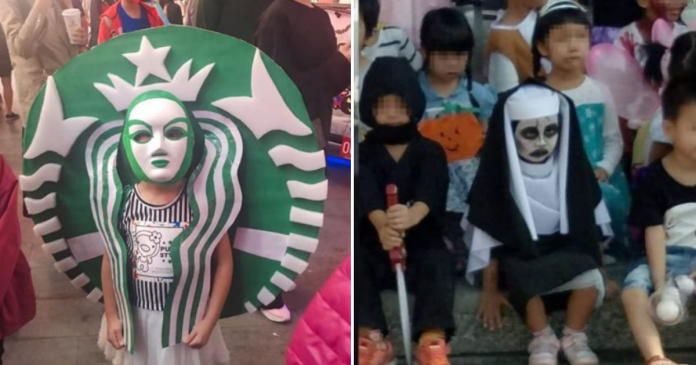 ‘Tis the spooky season where pumpkin spice lattes, outrageous costumes and crazy treats come together to form the holy trinity of Halloween.

It’s that month of the year that excites kids and adults alike, kids especially. Schools start whipping out the creepy decorations and shops and public spaces are just flooded with orange and black themed goodies.

The best part of this celebration is undoubtedly the costumes. This is when the brain juices start running wild and parents begin hunting for ideas like blood-thirsty draculas.

One popular idea for Halloween costumes is dressing up as famous characters from movies or fairytales. The witch, pirates and princesses are the three most sought after choices.

Though, year after year, someone never fails to outdo the rest with their creative concept that makes you go “Sweet mother of spiders, how did they even think of that?!”

In a light-hearted post that was posted on a Facebook page, netizens shared pictures of some of the most out-of-the-world costumes they spotted at a Halloween costume competition recently.

One that immediately caught the eyes of many was a child dressed in bright green and white. After some wondering, it came to be known that the costume she was wearing was the famous Starbucks logo – the mermaid!

That’s right! What an unusual character to play costume for. And that’s not the only gives-you-the-spooks-but-also-gives-you-a-laughing-fit look. In 2017, a boy was dearly dressed by his parents as Annabel, the infamous haunted doll. Either the boy didn’t seem too happy with his costume or he was trying to embody the true spirit of Annabel. We’ll leave you to be the judge of that.

This year, we saw another impressive kid who dressed up as the horror nun

Along with the line of beverages being made into costumes, aside from Starbucks, another drink has been up on the rise all around the world. It’s the pumpkin spice latte’s counterpart, bubble tea of course!

Bubble teas has gained enough popularity worldwide that some parents really thought they could be made into Halloween costumes. Just take a look at this adorable kid.

The look is even complete with the boba-filled straws! How cute!

Looking at the pictures, it is clearly evident that the parents are way more excited for Halloween than their children. Well what can we say? Deep inside, we all are little children looking for trick or treats, amirite?