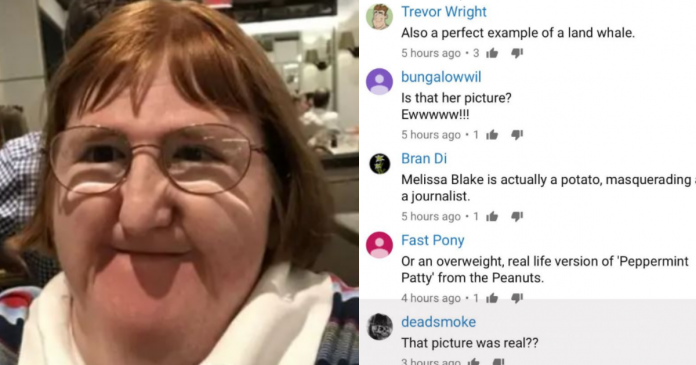 The Internet being a powerful tool of knowledge and communication, has paved way for an array of progressive ideas.

Unfortunately, with good comes bad, and the very Internet has also made cyberbullying a prominent issue, in social medias especially. For those who are unaware, cyberbullying is the act of harrassment via texts or media of any kind on the Internet.

When Melissa Blake wrote a post about Donald Trump, she was prepared for the backlash and criticism that would possibly ensue. What came as a shock to her was her write-up received a different kind of traction.

Her article was included in a YouTube channel and the comments section was overwhelmed with opinions – about her look. It seemed that people completely disregarded her political stance and took unsolicited concern on her looks.

A journalist and a disabled person, Melissa suffers from Freeman-Sheldon Syndrome. It’s a genetic disorder that restricts joint movements involving physical abnormalities in the head and face.

She runs a blog that advocates disability and freelances as a journalist. Melissa has always had more than her share of disparities in the way people treat and look at her, as shared on Newsbeat but this particular incident was the worse.

Though she usually remains unbothered, one comment got to her. Someone had told her to stop posting selfies as she was just too ugly. Melissa realized it was time to hit her bullies back.

What did she do? She countered the comments by posting three more selfies in addition to the screenshots of the comments on Twitter.

During the last round of trollgate, people said that I should be banned from posting photos of myself because I’m too ugly. So I’d just like to commemorate the occasion with these 3 selfies… ???? pic.twitter.com/9ZuSYFOtwv

To her warm surprise, she received tremendous support from the Twitter community for standing up and voicing out her struggles. She gained a wave of new followers which inspired her to start the hashtag #MyBestSelfie that encourages people to share pictures of themselves accompanied with endearing words.

The 38 year-old says that most women face the same fate everyday where they’re attacked for their looks, and she hopes she can help them feel better about themselves.

“It goes back to treating people how you want to be treated”, Melissa shares in RonProject.

No matter what, kindness will never go out of style.

A Chef who has Never Heard from Customers that the Food...