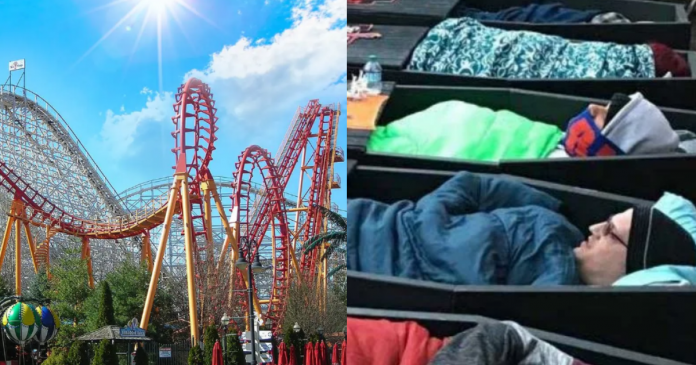 If you think that your relationship can prevail through anything, wait until you spend 30 hours of being in total darkness inside a coffin and in the company of ghouls with your partner!

The viral challenge basically requires the participant to lie in a coffin for 30 hours alone without smartphones, earbuds, watches or headphones

The coffin dwellers, however, are allowed bathroom and meal breaks at designated times only.

Due to the popularity of the challenge, Six Flags decided to bring the challenge again this year with a fun twist. Instead of spending 30 hours alone in a coffin, this time, couples or friends spent 30 hours together in a coffin.

As easy as it sounds, the couples had to endure the claustrophobic test in the 65-inch by 72-inch coffin for 30 hours alone

Well, they were not alone all the time as Fright Fest ghouls were also lurking around to test their courage.

According to the description on their website, coffin dwellers would be automatically eliminated if they get out of their coffin other than during the designated bathroom and meal breaks

Other than the restrictions on digital devices, the participants also had to complete mini-challenges which included things like eating cockroaches and riding roller coasters while wearing nausea-inducing goggles.

However, the challenges proved to be nothing for the winning couple, Anthony Hobbs and Shanell Hawkins when they emerged as winners after successfully completed the couples coffin challenge

They not only won US$600 but also two 2020 Gold Season Passes and a Fright Fest Prize package!

Nevertheless, those prizes were apparently not the grand prize of the challenge as both Hobbs and Hawkins later ended up engaged to each other at the end of the challenge.

According to Insider, Hobbs had been thinking of a way to propose to his fiancée when he later heard about the couples coffin challenge.

Winning the challenge followed by an engagement were symbolic to the couple as it marked the death of their past and the beginning of their new life as soon-to-be husband and wife.

“Needless to say, it was very deep and emotional for us and had so much meaning,” Hobbs told Insider.

Watch how the spooky coffin challenge looks like here

Beat the Summer Heat! A Video of a Bear Hugging a Block of Ice while Bathing Has Gone Viral

A Care Center Installed Customized Wallpapers on the Doors of Each Room Identical to The Doors the Elderly Have at Home So They Would...