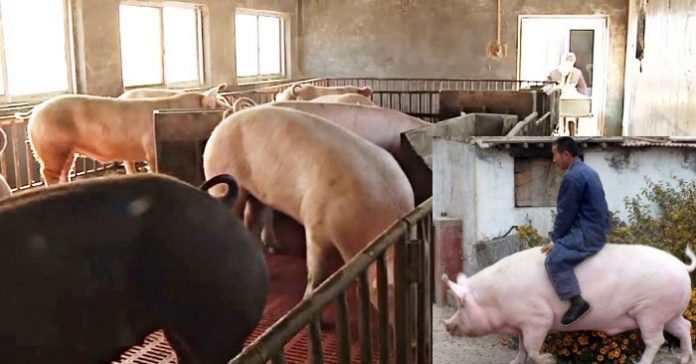 More and more farmers in the northeastern province of Jilin in China are raising pigs as big and heavy as a polar bear.

According to Bloomberg, the recent move made by many pig breeders in China is due to the higher demand for pork in the country.

As African swine fever has affected many pig farms across the country and pig inventories haven been plunging since last August, the demand for pork has seen quite a dramatic jump with wholesale pork prices increases up to 70 percent this year.

The normal weight for these pigs is usually at 125 kilograms.

The new trend among pig farms in China also means that the farmers could boost their profit by more than 30 percent, thanks to their heavier pigs as explained by Lin Guofa, a senior analyst at Bric Agriculture Group.

While the trend could lead to cause the supply situation to be “extremely severe” in the first half of 2020 in the country where pork is mostly consumed. According to Chinese Vice Premier Hu Chunhua, China will face a pork shortage of 10 million tons this year, more than what is available in global trade, as reported by Bloomberg.

Local governments are urged to resume their pig production, as usual, to bring the pig inventories to normal levels next year

However, many local farmers still worry about the recent African swine fever epidemic and are not in a rush to increase their pig counts for fear the swine fever will return soon.

Nevertheless, it appears that fattening their pigs may be the only option for now as the prices of piglet and breeding sow have increased, making it even harder and costly for small farms to rebuild their herds.

Until pig production in the country returns to normal levels, it looks like there will be more pigs as large as a 500-kg polar bear in China.