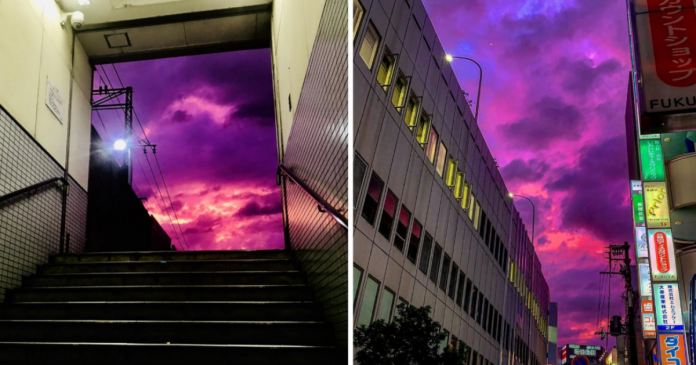 As residents in Japan preparing for the unusual weather as Typhoon Hagibis hit the country last Friday night, they were also surprised by the unexpected changes of the sky as it turned dark purple and pink.

Just hours before millions had to evacuate their homes before Typhoon Hagibis landed, many residents in Japan took to social media to document the pictures of the peculiar skies of Japan

As shown by the time stamp of the tweets, the skies appeared to turn purple and pink in the afternoon around 4 p.m.

Apparently, the strange skies is actually a phenomenon known as scattering, which occurs when heavy rains wash away large molecules in the sky that absorbs the most light

As a result, this leaves only small molecules in the sky and allows shorter wavelengths like violet to scatter more evenly

According to Meteorologist Lauren Rautenkranz, due to our eyes’ limitations, humans can only see blue

“As sunlight shines down to Earth, most of the colours of the spectrum are able to reach the surface uninterrupted,” she explained after purple skies were spotted in Florida after it was hit by Hurricane Michael in 2018.

“But the shorter wavelengths, blue and violet, are scattered in every direction. This light bounces from particle to particle until it eventually reaches your eyes.”

“But the sky doesn’t appear violet and blue because of our eyes’ limitations,” she said.

“The light was scattered around the moisture in the air, causing the magical purple color.”

A Man Whose Wife Falls Ill and Half Paralyzed Has Gone...