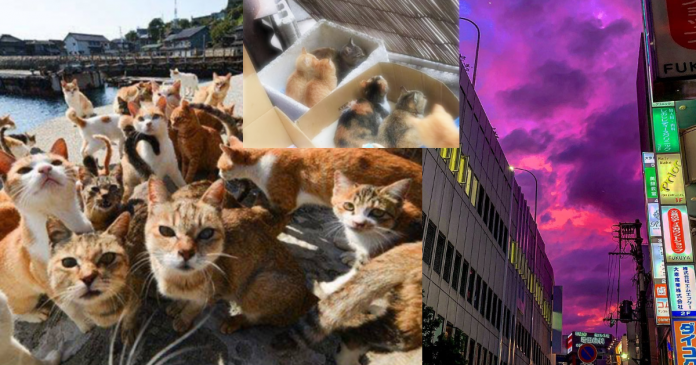 Recently, Japan was hit by the worst typhoon to hit the country in the last 60 years, Typhoon Hagibis, causing millions of others in Tokyo and its surrounding areas to evacuate.

While residents were able to evacuate in time before the typhoon struck, many were also concerned about the cats in Okishima, an island where only cats live.

Typhoon Hagibis has just moved away from land on Sunday morning, as reported by CNA

Even though the powerful typhoon mainly hit the northeastern coast of Japan and its surrounding area, it caused massive destruction and flooding across 36 of the country’s prefectures.

With hurricane-like force, many people were also concerned about the cats which live in Okishima

The island which is its inhabitants mainly consists of cats was near the path of destruction.

Fortunately, as the island is located far away from the capital of Tokyo, the cats did not suffer from heavy rainfalls or strong winds like their feline counterparts in Tokyo

In fact, the cats carried out their daily routine just like any other day, doing what they do best

Luckily, the cats were not affected by the worst storm in Japan in the last few decades.

However, if you are concerned about them, the cats have their own caretakers who take care of them when the weather changes

So, the cats seem to be doing pretty fine and there is nothing worry about them!

A photographer shot a random photo of this girl at homecoming...