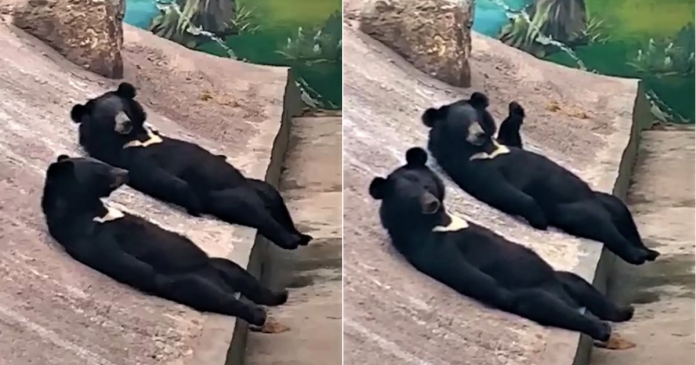 Compared to their brown and giant panda counterparts, sun bears are known for their aggressive and confrontational for no specific cause.

However, it seems like there are days when they do not feel like doing anything other relaxing and waving hands to visitors.

In a rare video captured by a Tik Tok user in China, a sun bear shows off its friendly and charming personality by saying “Hi” to the eager visitors

At the beginning of the video, two sun bears can be seen lounging in their captivity while enjoying the good weather.

Suddenly, one of the bears takes an interest in the camera, perhaps curious to see if the camera was recording

It was then that the other bear turns its head to see the camera as well and who knows what happens next is truly hilarious!

As if they are already aware of what a camera does, one of the bears then proceeded to raise its front paw and wave it to the camera to say hi!

According to National Geographic, sun bears are usually found in remote habitat and have a shy personality. Nevertheless, these sun bears are clearly well-adapted to the zoo environment and enjoying their fame.

Just look at how relaxed and friendly these bears are! They might know that they are the stars of the zoo and do not mind saying hello to visitors who are excited to meet them.