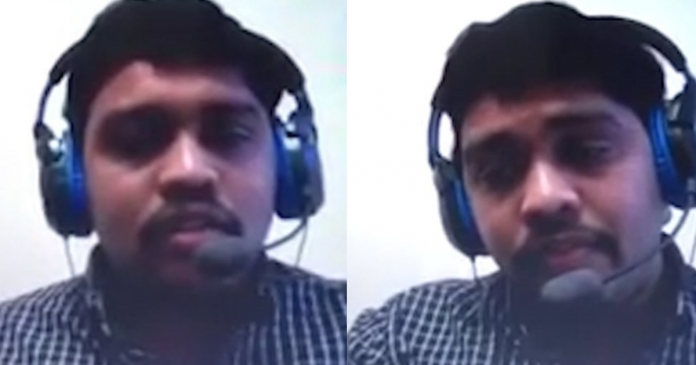 How far are you willing to go for the sake of getting the job you want? For this job applicant from India, he was even willing to hire someone else to answer the questions while he lip-synced it.

In the embarrassing incident, the job applicant was caught red-handed by the interviewer himself as his lip-syncing attempt during the interview failed miserably.

In the video which was first posted online in 2017 but only went viral recently, the job applicant’s mouth can be seen moving but not in time with the words spoken

As the video continues, the man is even seen being at loss for words but “his voice” continues to be heard.

Apparently, it does not take long for the interview to catch the man on his attempt to lip-sync someone else’s answers as he laughs and asks the man to stop lip-syncing

“Man, hold on hold on. I think it’s not you who is speaking, someone else is speaking here and you’re just lip-syncing,” the interviewer says to the man.

However, the man appears to not feel even the slightest of embarrassment as he later puts on a poker face and scratches his nose. He then can be seen fiddling with the buttons on his computer’s keyboard.

The interviewer then says that he can hear two people’s voices which belong to the job applicant and the other person behind the screen.

“I caught you… I already told you that it’s not the position where someone comes and gives you a task and you get on with it, it’s a very senior level position where you need to manage,” the interviewer says.

By this time, the job applicant seems to realize that he has failed the job interview as he appears to look dejected

“Going forward, I suggest you not (do) this. I mean, you need to be very formal, at least practise before you take the interview for these kinds of things.”

“I clearly caught you, you’re also speaking in a really low voice, speaking with your lips, okay. I’m sorry about that, thank you.”