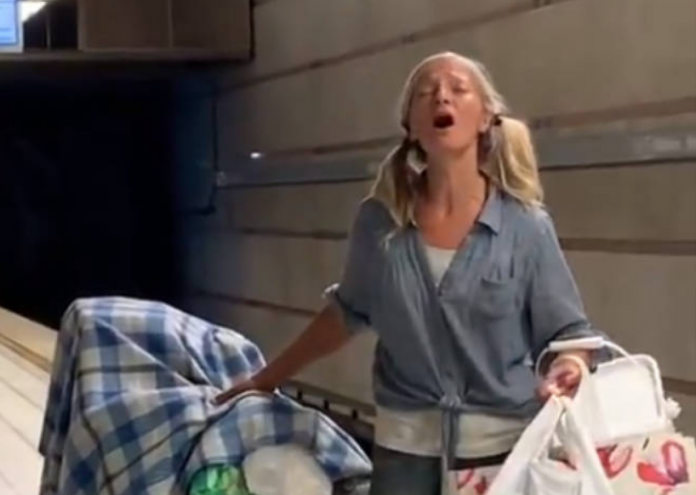 What started as a viral video on social media has now helped a talented homeless subway woman to launch her career as an opera singer when she was offered a recording contract by Grammy-nominated producer Joel Diamond.

According to CBS News, Diamond has offered Emily Zamourka, who became a recent Internet sensation after a video of her singing Puccini’s “O mio babbino caro” at a Metro station in Los Angeles.

“You know something — and I felt it in my gut — there’s not only a great story here, but also a great career here. And all she needs is an opportunity to help her fulfill her dream,” Diamond told CBS News.

“And that’s when I reached out and I hope to be going into a recording studio within the next couple of weeks.”

She wanted to pursue her dream of becoming a singer but she was forced to become homeless when her US$ 10,000 violin was stolen in 2016 and she could no longer pay bills and had to move out of her apartment, according to CBS News.

“They broke in, they stole my violin when I was playing in downtown. And that’s when all the problems started,” she told TMZ.

Despite being forced to live on the streets after suffering from health issues, Zamourka keeps her spirits high through singing.

While she never had any formal training as an opera singer, Zamourka proves her talent and shows off her beautiful voice often by performing opera pieces at the subway station.

“You know why I [sing] in the subway? Because it sounds so great,” she told ABC7.

Thanks to the video made viral after an LAPD officer shared on Twitter, she quickly received attention from across the world and donations started pouring in.

Nearly US$100,000 have been raised through two GoFundMe accounts and it looks like Zamourka is on her way to achieve her long-time dream as a singer with an offer from Silver Blue Records.

Titled “Paradise”, the record is a classical crossover with EDM. “Nobody’s done it yet. That’s the direction I’m going to take her,” Diamond said.

However, it has not been confirmed whether or not Zamourka has accepted Diamond’s record deal.

As for Zamourka, she felt “overwhelmed” now that her dreams to become a singer are coming true.

“I achieved something finally that I was longing for … to become a professional singer,” she told GMA. “I am overwhelmed and I am ready to to to be a working artist.”