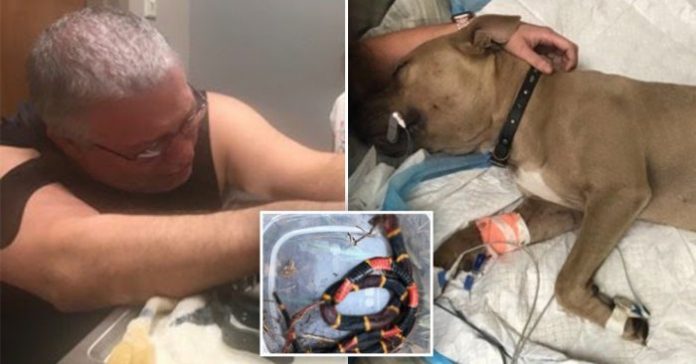 When Oriley Richardson was playing in his family’s backyard on September 23, their family’s pitbull Zeus suddenly jumped towards him and attacked something on the ground. Oriley thought that the pit bull was playing with a rope. It was only later that he realized it was a venomous snake.

During the shocking incident, Zeus was trying his best to protect 10-year-old Oriley from the coral snake. That was when Oriley’s brother, Orion came to the backyard to change Zeus’ water.

As if he knew that the boys’ lives were in danger, Zeus quickly pounded on the snake in an attempt to smother it and to prevent the snake from slithering across the backyard towards the boys

In spite of not being aware of the presence of the coral snake. both Orion and Oriely managed to escape unharmed.

Unfortunately, the snake had bitten Zeus four times before the pitbull bit off its head and swallowed it.

The family only learned about the snake after Orion noticed that Zeus was not being himself later on.

They later quickly rushed Zeus to the animal hospital but sadly, it was too late. The brave pitbull did not survive even after he was administered anti-venom by the staff.

According to Orion and Oriley’s father, Gary Richardson, Zeus’ death did not only broke their hearts but also Zeus’ mother, Sega. Sega was also there with the whole family at the hospital to see Zeus for the last time.

“Sega goes over to Zeus’ head and puts her paws up on the table and takes a sniff,” Gary told CNN.

“Her ears came back, she got down, she instantly jumped on the sofa next to me and put her head on my thigh in sorrow. At that moment not only was my family broken, but his own mother was broken.”

Following Zeus’ death, Gary hoped that the public perception towards pitbulls will change

“He was my best friend,” said Gary said. “I’m torn between wanting to be happy that this situation has brought awareness to his breed and their kind and loving nature, and the sorrow of having lost him.”