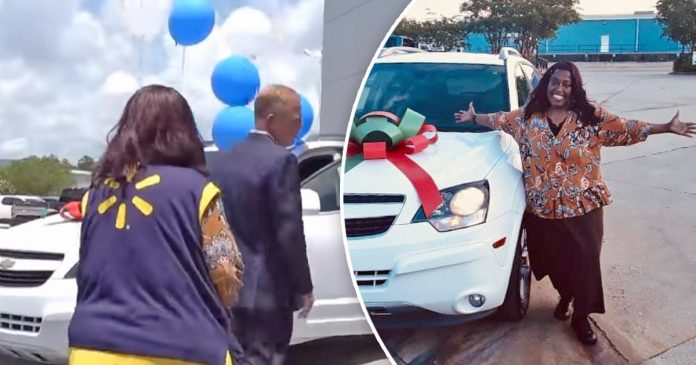 52-year-old Anita Singleton had to walk for six miles to her workplace, Walmart, at least once a week since three years ago. Even though the commute was dangerous as Anita had to use the busy U. S. Highway 11, she remained positive and optimistic about her job.

Luckily, Anita’s dangerous commute seemed to have come to an end when Slidell Police officer Brad Peck, 28, saw her walking on highway one early morning.

Brad was driving over a narrow bridge on Highway 11 after his night shift ended at 5.30 am when he noticed some cars on the opposite lane swerving and slowing down.

Concerned with Anita’s safety, Brad then offered her a ride. They later shared a conversation in the car and Anita’s positivity had moved the police officer.

“We talked about everything, from our faith and Jesus and work ethic, how I was raised, how she was raised. It was really cool — humbling in my eyes,” Brad said.

His post quickly went viral online that it caught the attention of a local news station who reposted Brad’s story.

Local car dealer, Matt Bowers, later saw the post and decided to donate a car to Anita. “I thought it would be nice and refreshing and cathartic even to do something nice for somebody,” Matt told ABC News.

Suffice to say, Anita cried tears of joy when she learned her luck.

Even better, the Walmart cashier not only got a new car but she was also given a year’s worth of insurance!

Brad said that Anita’s story had taught him about work ethics. “I told her a lot of people would use that as a crutch or an excuse to not go to work,” he said. “She never missed a beat.”