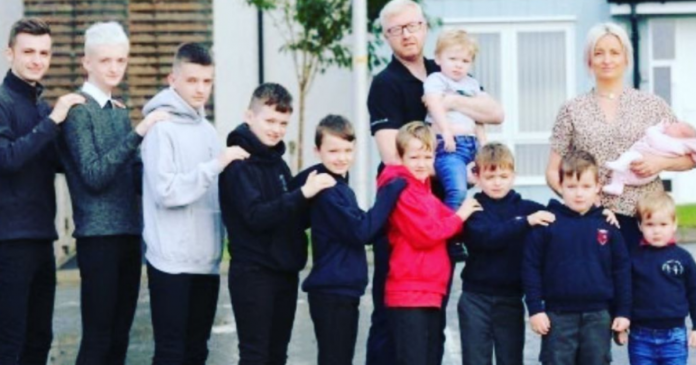 After giving birth to 10 boys in a row, Alexis Brett was expecting another baby boy when she fell pregnant for the 11th time. That was why she had a hard time to contain her excitement when she was told that she was pregnant with a girl.

Alexis who is a stay-at-home mother has 10 boys with her eldest is now 17 years old and her youngest boy, Rothagaidh, 2.

When her youngest son was born, she expected it to be her last pregnancy.

However, she was unexpectedly pregnant again for the 11th time.

When Alexis and her husband, David, were told that she was pregnant with a girl, the couple could not believe it

“I was shocked, but delighted. Now she’s here with us, it’s a fantastic feeling,” Alexis told the Mirror.

According to Alexis, they never planned to have many children in the hope to have a girl

“We’re asked a lot if we had so many children because we were hoping for that elusive girl. I can honestly answer ‘no’. Cameron wasn’t planned, but I was happy all the same,” she said.

Now that Cameron is here, Alexis said that she could finally buy pink clothing and things for her only daughter.

A 32-yo Woman Becomes Popular for Her Princess Jasmine Video on...