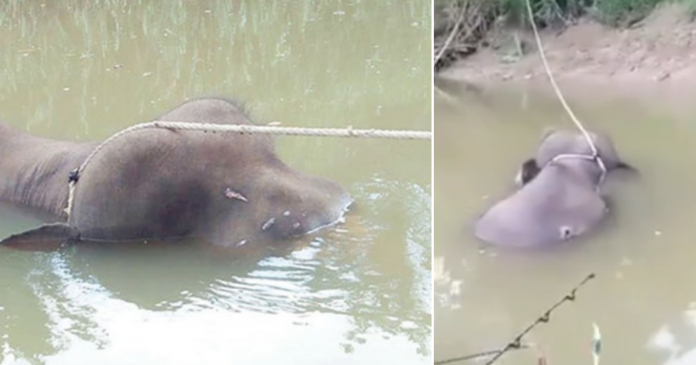 Baby-faced, oversized ears and plump bellies much like the popular Disney animated character, Dumbo, Borneo pygmy elephants are the smallest elephants in Asia and probably the cutest. Unfortunately, their adorable qualities could not stop them from becoming the target of cold-blooded poachers.

Recently, a Borneo pygmy elephant was found dead with its body partially submerged in Sungai Udin, Tawau in Sabah on September 25.

According to The Star, the elephant was reported to be shot over 70 times until it died

A source from the Sabah Wildlife Department revealed the shocking truth following a post-mortem conducted by a team of local vets and wildlife officials.

“It was found tied by the riverbank and more than half of the animal’s body was submerged in the water,” said the source.

“It is not sure whether the elephant had suffered greatly before dying but one bullet was found right through the left temple.”

“The shot had fractured and penetrated the skull and decimated the brain, meaning death would have been instantaneous after this shot was fired,” the source said.

According to WWF, Borneo pygmy elephants are listed as one of the world’s endangered animals with only less than 2,000 in the wild.

Following the killing of the pygmy elephant, a United Kingdom-based international conservation group, Orangutan Appeal, has offered RM10,000 (US$2,383) to the pool money offered by the Sabah Wildlife Department and an anonymous citizen of RM20,000 (US$4,767), making the total of the reward RM30,000 (US$ 7,151).

Investigations are currently underway as police, together with Malaysia’s Wildlife Department and the Federal Water, Land and Natural Resources Ministry track down the culprits.

Friendly Golden Retriever Loves to Hug Strangers on the streets and...