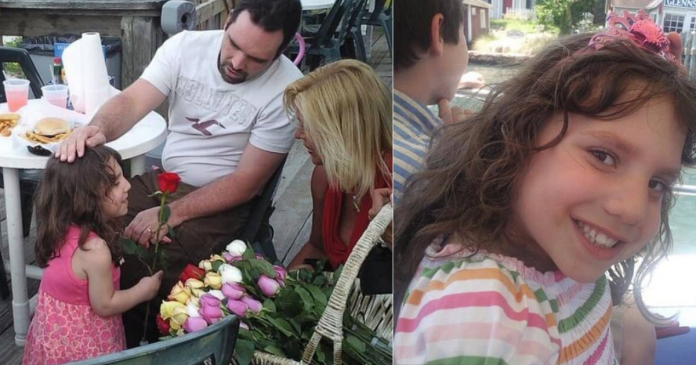 When Kristine, 45, and her ex-husband, Michael Barnett, 43, decided to adopt Natalia from Ukraine in 2010, they were informed that Natalia was suffering from a rare form of dwarfism and had walking difficulties. Nevertheless, that did not stop the then-married couple to adopt the “little girl”.

However, just a few years later, Kristine and Michael abandoned the girl in an apartment alone as they claimed that Natalia was actually an adult posing as a little girl.

In a bizarre story that resembles the plot from the horror movie, Orphan, in which a couple adopts an orphaned girl who turns out to be an adult, Kristine and Michael revealed that they decided to abandon Natalia after realizing that she was a grown woman

The couple who also adopted a boy, Jake, who is diagnosed with autism moved to Canada with their other children in 2013 from Lafayette, Indiana and left Natalia alone. Just before they moved to Canada, Kristine and Michael changed Natalia’s legal age from 11 to 22 years old in an Indiana probate court.

Several years later, the couple was then charged with criminal charges for abandoning their adopted daughter on September 11, 2019

However, Kristine defended herself by telling with WISH-TV that she and Michael were scammed through the adoption and it resulted in them adopting an adult who is a psychopath.

During the interview, Kristine also shared with WISH-TV copies of a letter from a doctor that the birth date on Natalia’s birth certificate is inaccurate, she had adult teeth and already hit puberty.

The letter also claims that Natalia admitted that she was actually over 18 years old after she was admitted to a psychiatric hospital in 2012 where she was allegedly diagnosed with sociophatic personality disorder. The letter, however, could not be proved to be authentic.

In another interview with Daily Mail, Kristine alleged that Natalia tried to kill her at one point with a cup of coffee laced with chemicals, bleach and cleaning products

“She was standing over people in the middle of the night. You couldn’t go to sleep. We had to hide all the sharp objects. I saw her putting chemicals, bleach, Windex, something like that in my coffee and I asked her, ‘What are you doing?’ She said, ‘I am trying to poison you.’ The media is painting me to be a child abuser but there is no child here,” Kristine said.

“She would make statements and draw pictures saying she wanted to kill family members, roll them up in a blanket, and put them in the backyard,” Kristine added.

Kristine also revealed that Natalia had periods and full pubic hair, something that she allegedly noticed when she was giving Natalia a bath.

“I was so shocked. I had just been told she was a 6-year-old and it was very apparent she wasn’t,” Kristine said.

While Kristine claimed that she had proof about Natalia posing as an adult, the police, however, did not believe her story as it did not align with what her ex-husband Michael said

According to Michael, Natalia was indeed just a little girl when they abandoned her in an apartment in Indiana, Washington Post reported. He also revealed that Kristine coached Natalia to tell people that she was 22 years old if someone asked.

Natalia’s bone density tests which were taken in 2010 and 2012 also proved that her bones belong to a child.

With Natalia’s current whereabouts remain unknown and several questions regarding how Natalia was able to take care of herself after she was abandoned and how the couple managed to change her legal age, no one knows for certain whether or not Kristine was telling the truth.

Kristine will appear back in court in December for a pretrial conference while Michael is due to appear in October for a confidential hearing, NBC News reported.

Loyal dog seen shaking and tearing up next to the...