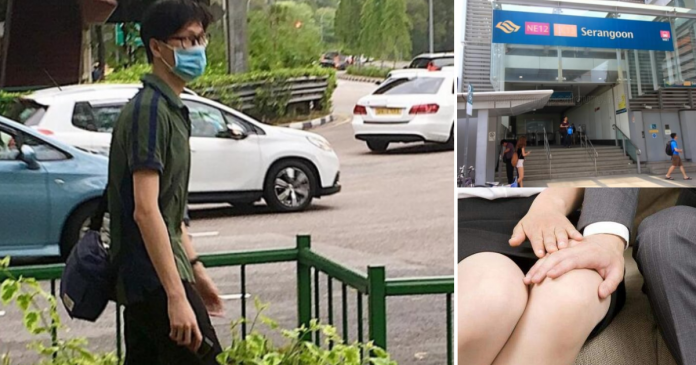 A 23-year-old undergraduate student from the National University of Singapore (NUS) who repeatedly molested a woman on a train avoids jail as the judge concluded his offences considered as “minor intrusions”.

According to The New Paper, the offender, Siow Kai Yuan, has been accused of molesting a woman on a train on the North East Line heading towards Punggol station at about 11.30 pm on Sept 12, 2018.

Prior to the incident, Siow was said to notice the 28-year-old victim who was taking the same train wearing a pair of shorts with “very long legs”.

He then sat next to her and used his left hand to touch the outside of her right thigh. The victim then shifted away from him and crossed her legs.

However, Siow who is majoring in Applied Mathematics in NUS continued to harass her as he later touched the outside of her right thigh for the second time before the woman moved to another seat.

The victim then alighted at Serangoon station and Siow followed her

When the victim was on the escalator, he stood behind her and ran his finger to touch her buttocks over her shorts.

Shocked at Siow’s action, the victim then turned around and shouted at him, causing Siow to flee. The woman then alerted a station officer and pointed at Siow who was running away.

She then lodged a police report about one and a half hours later which led to his arrest at Hougang Avenue 5 three days later.

According to The New Paper, the prosecution urged the court to sentence Siow to a 6-week jail term instead of probation as he admitted that to commit similar offences since he enrolled in NUS in 2016

“The accused knew it was wrong but was emboldened after previous successes. He only sought help after facing the university’s Board of Discipline,” said Deputy Public Prosecutor Benedict Chan who called the offense “deep-seated habit” and “troubling”.

Despite DPP Chan pointing out that Siow looked “normal in every sense” and did not suffer from any disorder, Judge Kaur rejected calls from the prosecution to sentencing him a jail term and said that it was “just a brief touch on the thigh”.

“Looking at the nature of intrusion, I would say it is minor,” the judge said, acknowledging Siow’s previous offences to which she said, “they were minor”.

The 23-year-old had pleaded guilty to one charge of molesting the victim while the other two charges were taken into consideration.

Judge Kaur also made a comment regarding Siow’s excellent academic achievement. “I think there can be no doubt that there is extremely strong propensity for reform. He was 22 years old when he committed the offences… and the nature of the acts (is) relatively minor.”

Siow is also a freelance home tutor who has a cumulative average point (CAP) of 4.39 out of 5. Following the court’s decision, Siow was slapped with 150 hours of community service and a $5,000 bond for good behaviour.

The judge also said to Siow that she believed in his will to reform. “I have every confidence you will not re-offend and hope you don’t disappoint me,” the judge said.

While Siow managed to avoid a jail term, the victim said that she felt disappointed at the court’s decision, adding that his offences were not minor at all

“I don’t think about what happened all the time. But when I take the train, I am mildly paranoid and aware of my position relative to other passengers. I actively try to sit or stand near other women where possible. I now feel uncomfortable wearing shorts in public and prefer using the lift than the escalator,” she told the newspaper.