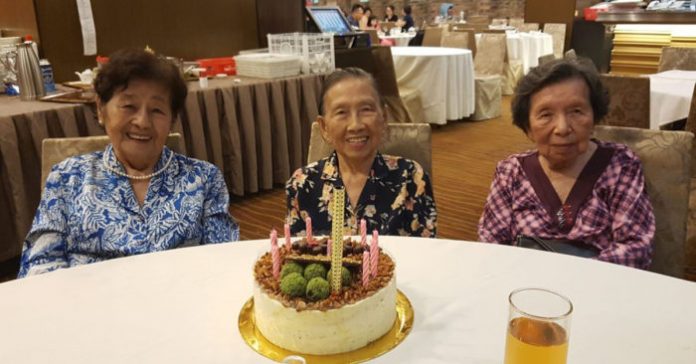 While it is common for close friends to drift apart in the case of a new job, moving to a new place or marriage, these three nonagenarians are proud to show off their close friendship that has spanned over 80 years despite being separated during the Second World War.

Now in their 90s, Tan Bee Joo, Foo Mee Keow and Cheah Phaik Soo still get excited every time they reunite just like when they first form a friendship with each other when they were seven years old.

Their friendship actually went back to the 1930s when they first met each other at primary school. The three golden girls went to the same primary school, St. George’s school in Penang, Malaysia.

According to Tan in an interview with Star2, the three of them quickly forged a close friendship that they became almost inseparable.

“In school, we were so close, almost like sisters,” Tan recalled their childhood days. They often spent time together playing games like five stones, snakes, ladders and checkers and shared meals during school recess.

They remained close throughout primary school and secondary school but their friendship suddenly took a different turn when they were forced to separate during the Japanese Occupation in Malaya in 1941.

When Malaya (now called Malaysia) was occupied by the Japanese between 1941 and 1945, many schools were forced to shut during the war including St. George’s.

“Never did I think that when we bid each other farewell for the holidays in November 1941, it would be the last time we would see each other for a long time,” Foo said.

Foo, Cheah, and Tan were only 13 years old before they went their separate ways.

After the Japanese surrendered in 1945, the girls, however, did not return to school. Luckily for Cheah and Foo, they managed to get in touch with each other as they remained in Penang. Chean decided to forgo her studies and became a midwife as her mother insisted before settling down in her early 20s while Foo worked as a seamstress.

Meanwhile, Tan moved with her family to Kuala Lumpur during the Japanese occupation and lost touch with her two best friends.

Years had passed by ever since then but there was never a day when Tan had forgotten Cheah and Foo and them likewise.

Fortunately, a touching encounter at a night market reunited the ladies back after 40 years of being separated.

Tan was buying vegetables at the night market when a familiar voice asked her if she was Bee Joo. The voice belonged to none other than her long-lost childhood friend, Cheah.

“Even though my back was facing her, I could recognize that familiar-sounding voice speaking in Penang Hokkien,” Cheah recalled.

Despite four decades had passed since they got separated during the Japanese Occupation, Foo, Cheah, and Tan quickly resumed their friendship as if they had never been separated before.

“My friends are always there for me, through thick and thin. That’s what I like best about Mee Keow and Phaik Soo,” Tan shared about their friendship.

As for Foo, it is the constant support that they have for each other over the years that helps their friendship remains strong over the years.

Grandma cleans up 52 beaches in 1 year to show that...