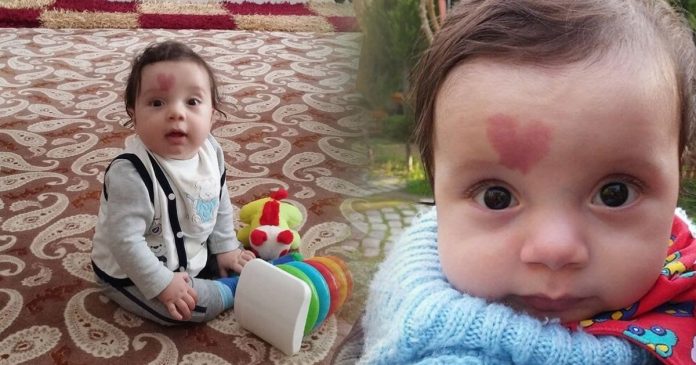 For many people, birthmarks are often found on the parts of the body that are usually hidden from sight. However, this adorable baby from Turkey does not need any reasons to hide his unique birthmark especially when it is in the shape of a heart!

When 30-year-old Murat Engin and his wife Ceyda welcomed the newest addition to their family in 2015, they did not expect for baby Çinar to be born with an unusual birthmark on his forehead.

Murat was the first person to notice the heart-shaped birthmark on Çinar’s face after the nurse cleaned the blood on the newborn’s head.

“After a nurse cleaned the blood on his head I was the first to see the birthmark on his head,” Murat told Daily Mail. “I was really surprised. When I came to close his head I realised that it was an amazing heart.”

Despite the birthmark is clearly visible on his son’s forehead, both Murat and Ceyda believe that it is a great blessing to their son

The heart-shaped birthmark is considered good luck in their family

Apparently, the heart-shaped birthmark does not only bring luck to the baby but fame and love as well

When Çinar was born, he instantly became the talk of the delivery room as nurses were eager to take selfies with him.

As he grows up, Çinar’s fame continues as they often get stopped in public as many fans want to take photos with the ‘love baby’

“All of our friends are curious about his birthmark because of its heart shape,” Murat said. “They say that he is a love baby.”

“When we go to hospital for custom control, nurses and doctors know him and called him as ‘Hearted Boy.’ He already has many fans.”

Now aged 4, Çinar is now a playful young boy who often melts many people’s heart with his smile

“We love him and his birthmark,” Murat said, adding that they hope for Çinar to cherish his special birthmark.