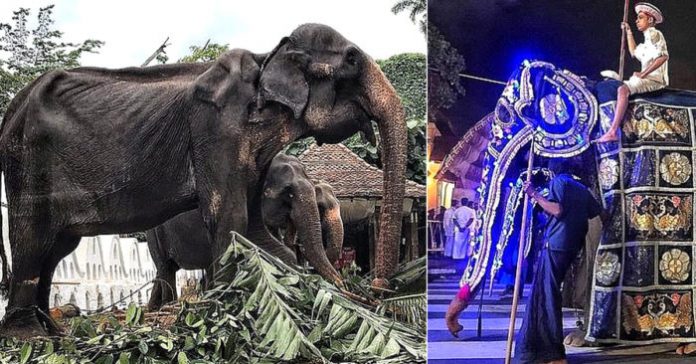 70-year-old Tikiri the elephant from Sri Lanka who sparked international outrage after heart-wrenching photos of her emaciated body circulated worldwide has died, its keeper confirmed on Tuesday.

According to Metro.co.uk, Tikiri’s keeper confirmed the elephant’s death on September 24.

“Yes, she died this afternoon,” the keeper said.

The keeper added that a post-mortem would be done by a vet from a local hospital to investigate Tikiri’s death as per order by the Sri Lankan government.

Global outrage sparked after Lek Chailert, who is the founder of the Save Elephant Foundation (SEF), shared Tikiri’s photos on social media where the frail elephant wore a colorful costume at the Perahera festival

Tikiri was noticeably looking feeble and severely undernourished in her viral photos which has led many to criticise the local authorities for forcing her to parade for several kilometers every year.

In spite of the public outcry over the elephant’s mistreatment, a spokesman from the Buddhist temple told Metro.co.uk that Tikiri suffered from a “digestive ailment” which had prevented the elephant from gaining weight.

According to BBC, the spokesman from the Sacred Tooth Relic said that despite Tikiri suffering from the ailment, it had not “affected her strength and abilities.”

Following the backlash received from across the world, Tikiri was later pulled from the annual march at the Perahera festival and was given medical attention

She was then returned to her keeper.

However, SEF revealed that her condition had not changed and that Tikiri’s health further deteriorated until she passed away earlier this week.

“The day that I met Tikiri, her eyes locked with mine, telling me that all I needed to know. Her own fear and anger and sorrow is now part of that longer memory of her kind which should bear us no affection,” Chailert wrote in the caption in an Instagram post dedicated for Tikiri.

“RIP dear Tikiri. Never look back to this world so cruel toward you and your friends,” Chailert wrote

While Tikiri’s story is now well-known in many parts of the world, many elephants in Sri Lanka are still forced to perform in parades annually and may receive similar treatment, if not worse, as Tikiri had.

Tikiri was among 60 elephants who were coerced to perform at the Parahera festival in Kandy, Sri Lanka every year.

In light of Tikiri’s mistreatment, Animal Rights group, PETA, has also urged the public to not engage in elephants ride or performances and for stronger enforcement of animal protection laws.