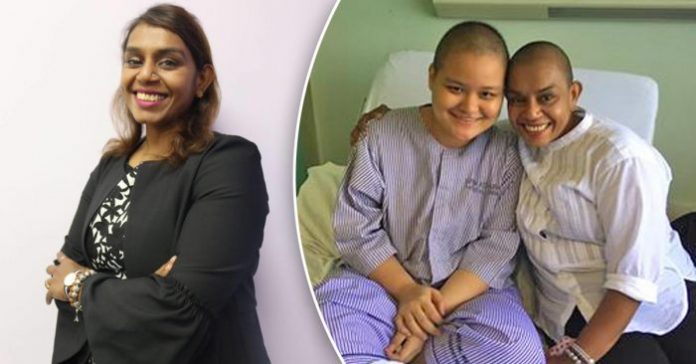 A 39-year-old Malaysian lecturer’s heartwarming move to show her support to her cancer-stricken student by shaving her head bald has touched not just her student but also thousands of netizens.

According to Richelle Hii Hua Yin, 20, she never expected for her lecturer, Dr. Bamini KPD Balakrishnan to go the extra mile in a show of sympathy when she was diagnosed with stage three bone cancer earlier this year in February.

“[I] did not expect that she (Dr. Bamini) would change her image to show her solidarity to me,” said Richelle to Harian Metro.

Richelle who is currently studying at University Malaysia Sabah said that although she was not close with Dr. Bamini, she was moved when her lecturer showed her support and took time to visit her at the hospital.

“I really appreciate her sacrifice and only God could repay her kindness,” Richelle said.

According to The Star, Dr. Bamini who works as a senior lecturer at University Malaysia Sabah’s Business, Economics and Accountancy Faculty decided to cut her locks as a way to show her support when she first learned about Richelle’s cancer diagnose.

The lecturer agreed that there were many other ways to show solidarity with her cancer-stricken student but she wanted to support Richelle by shaving her head after her student lost her hair due to chemotherapy.

“I want her to know that we’re all here for her and she is not alone in this difficult moment,” Dr. Bamini said.

“There’s no intention to seek popularity. I just want to give her support and courage to keep being positive,” she added.

According to her, Richelle was a bright student who achieved an excellent result with a cumulative grade point average (CGPA) of 3.6 in her first semester. She was also an active member of the Police Under­graduate Voluntary Corp.

There was nothing that the lecturer hoped except that Richelle would regain her health as soon as possible.

“I’m asking all my friends and also the public to pray for her smooth recovery,” said Dr. Bamini.