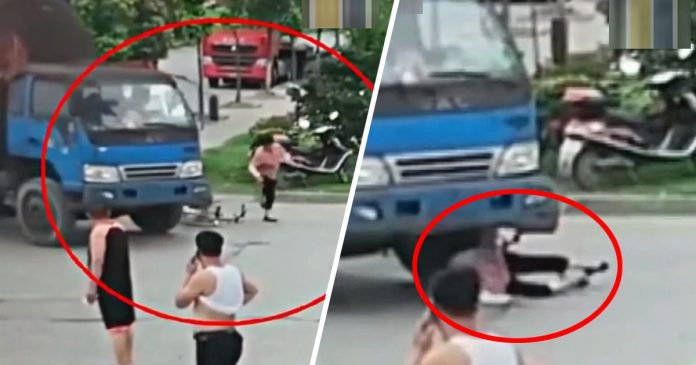 We’ve heard about people trying to cheat into getting compensation all the time, but this is probably the first time we get to witness it with our very own eyes.

According to SCMP, a woman named Tang from Southeast China shamelessly staged her own accident by trying to make it looks like her bicycle has been knocked off by a truck. In her attempt to cheat the truck driver into paying her compensation, the woman might have never thought about her act getting caught on surveillance camera.

The incident took place at Anhui province on the 4th of July, Tang was seen on a surveillance camera running alongside the truck while carrying a bicycle.

As the truck turns a corner, Tang quickly throws her bike to the ground and slides her body under the truck’s front bumper—lies up against a wheel, trying to make it looks like she has been knocked down.

Tang was rushing to get under the truck.

She later called the police and claimed that she had been the victim of a traffic accident. However, her acting failed to impress the officers even though she was said to be “moaning in pain” when the officers arrived. It was also said that she actually staged the accident after having a business dispute with the driver to sought revenge.

After the officers reviewed the footage from the surveillance camera, it was clear that she was indeed trying to fake the whole accident.

However, it was unclear if Tang was punished for her actions. After the video was spread online, people can’t help to laugh and criticize her action—wishing that she’ll be punished to avoid more and more scams like this from happening again in the future.

As Tang clearly broke the law, Beijing lawyer Han Xiao stated that she could face a fine or detention.

This woman in China claimed she was seriously injured by this truck. Then police saw this footage.

A Woman Visiting a Park Finds a 4.38-carat Yellow Diamond on...