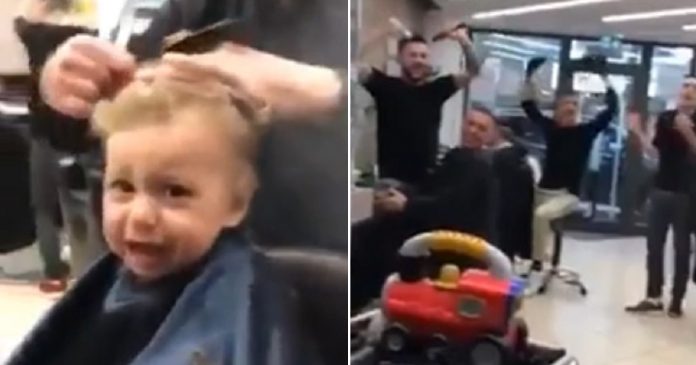 Trying new things even as simple as cutting the hair can be terrifying and nerve-wracking for toddlers but these barbers in a barbershop in Italy just know the best way to keep them calm.

In a now-viral video which has made multiple rounds on social media, barbers in a barbershop somewhere in Italy showed how they handled their whiny customer by singing a children song.

It all began when the adorable boy had to get a haircut in a barbershop in Italy. However, he was not very keen to see his hair being cut and started to whine and cry.

Seeing the boy became frightened over the simple routine, three other barbers who were standing near their chairs sang their hearts out for the little boy.

According to Reddit, the barbers sang a popular Italian children song, “I Due Liocorni,” which means “The Unicorn Song.”

The song was based on the children’s poem “The Unicorn” by Shel Silverstein, which tells how the unicorns missed the sailing of Noah’s Ark before the great flood when every other animal had already boarded the boat.

Not only they sang to distract the boy, but the three barbers also put an impromptu performance complete with hand gestures to keep the boy entertained while his barber cut his hair.

The little boy just could not stop grinning as he watched the barbers singing the children song, leaving his barber in peace to finish cutting and trimming his blonde hair.

Needless to say, their performance not only managed to keep the boy smiling and stop whining but he also ended with a new haircut!

Watch how the Italian barbers sing along to distract the little boy here.

Barbers singalong to distract a young boy who did not seem too happy to be getting a haircut. from r/HumansBeingBros

Adorable moment when puppy stalks a kitten and pretends to avoid...