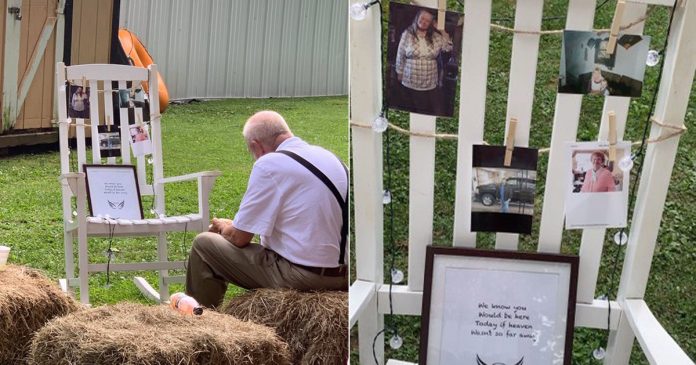 Weddings are a wonderful time for family members from far and near to gather and celebrate the joyous occasion together but sometimes, it is not possible for some family members to come because they are too far away.

Sahrah Elswick recently celebrated her marriage to her newly wedded husband Zachery in Alderson, West Virginia. Everyone was invited including her late grandmother whom she fondly called, Mawmaw.

As a little tribute to her late Mawmaw, Sahrah set up a special seat for her grandmother, a white rocking chair with photos of Mawmaw and a sign that read, “We know you would be here today if heaven wasn’t so far away.”

However, she never expected for her grandfather whom she called Pawpaw to accompany the lonely white rocking chair.

In a heartbreaking photo taken by Sahrah that day, her Pawpaw sits across Mawmaw’s white rocking chair and eats there.

“It meant everything to me to see this at my wedding. It was so important that she be a part of my day because we were very close and I’m so glad I did it because now I see that it meant even more to him,” Sahrah told TODAY Food.

Pawpaw or as his name, Billy Gray, married Mawmaw or Barbara for 45 years. Barbara, sadly passed away in 2017.

According to Sahrah, her grandparents had a “fun, loving relationship.” “They were rarely serious and stayed happy and [made] each other laugh,” she said.

“They stuck together through everything. They never really had much but it didn’t seem to matter at all to them.”

She noticed that while other guests were sitting at the tables during the wedding, she saw her grandfather sitting on the hay alone.

Sahrah then asked him why he sat at Mawmaw’s memorial during dinner and her grandfather said that he “just wanted to sit with her and be there with her.”

“When I saw him sitting there I immediately burst into tears I was just so heartbroken and also in awe at how much he loved her,” Sahrah said.

Apparently, Sahrah was not the only who was touched by her grandfather’s loving action.

When she posted photos of her grandfather to Twitter, it quickly captured the netizens’ attention.

Pawpaw sat and ate with mawmaw today at my wedding ? pic.twitter.com/GEXWMCfgXB

So far, the tweet has garnered over 179,000 likes and almost 20,000 comments from the netizens with some of them shared their fond memories of their grandparents.

Mawmaw may not be able to attend the wedding but we know she would love to see how much her loved ones still remember and miss her.