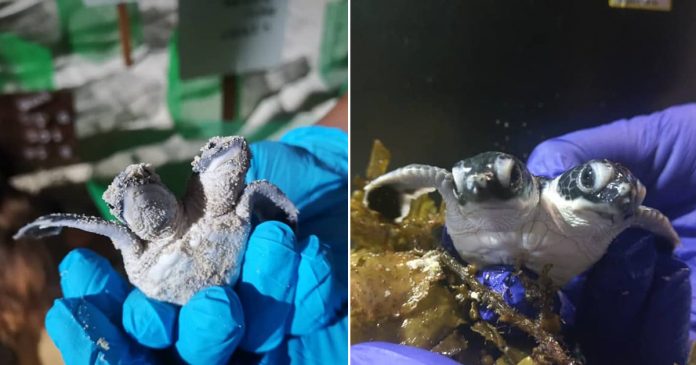 A two-headed turtle hatchling made an incredibly rare sighting at a green turtle nest at Mabul Island, an island off the south-eastern coast of Sabah, Malaysia on Monday (July 15).

According to SJ SEAS, the conservation arm of dive operator, Scuba Junkie on their official Facebook page, the rare hatchling came up at the Mabul Turtle Hatchery. It was one of the 93 hatchlings released recently.

The two-headed turtle hatchling was then kept for observation and further study while the other 92 hatchlings were released to the sea.

As you may have already seen in the local media, a two-headed green sea turtle has hatched at our Mabul Turtle…

SJ SEAS chairman Mohd Khairuddin Riman told The Star that the hatchery has helped hatched and released around 13,000 hatchlings so far but it was the first time for them to discover a two-headed hatchling.

SJ SEAS conservation manager and marine biologist, David McCann, said that the heads of the turtle hatchling can breathe independently and give separate reactions when there is a stimulus.

“It is utterly fascinating. The right head seems to control the front right flipper, and the left head the front left flipper,” McCann told The Star.

“Yet they are capable of coordinating their movements in order to walk and swim,” he added.

As explained by SJ Seas on their Facebook page, the two-headed turtle hatchling was the result of an extremely rare condition called dicephalism and can be seen in a wide variety of species.

According to Sabah Wildlife Department’s (SWD) Wildlife Rescue Unit chief veterinarian Dr. Sen Nathan, although the condition may be rare, it is not something that is unheard of as a similar case was also reported at Redang Island in 2014.

“The hatchling was studied for three months before it sadly died from pneumonia. Unfortunately, these turtles would not survive in the wild – including this specimen, whose plastron is not fully developed or closed,” Dr. Sen explained.

“Observation by the biologists on-site also indicated that in deeper water, one head couldn’t get above water comfortably to breathe. The hatchling is being kept in shallow water, allowing it to breathe easily,” he said.

The two-headed hatchling was being kept at Mabul Turtle Rehabilitation Centre for care and observation just after it was born. However, it died on Thursday (July 18).

Owner shocked when his parrot was lying inside the cage looking...