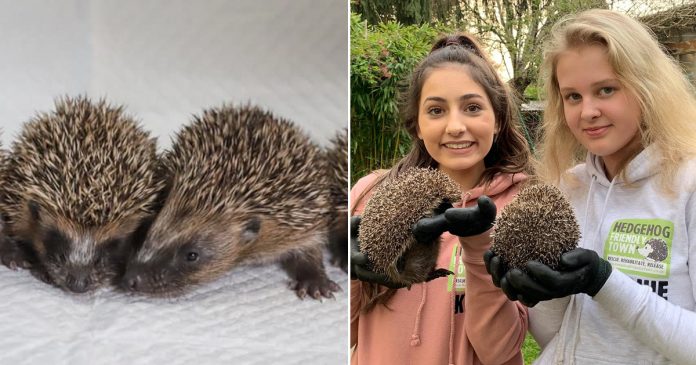 After hearing the population of hedgehog in the UK kept declining since 1950, a pair of 13-year-old teenagers decided to do something about it. Today, they have saved 400 hedgehogs after setting up their own ‘hedgehogs-only hospital’.

According to Huffington Post, Sophie Smith and Kyra Barboutis, both 13-year-old schoolgirls from Stratford-Upon-Avon started their project to help rescue hedgehogs when they heard that the population of hedgehogs in the UK has declined from 30 million in 1950 to just 1.5 million today.

They first started the project four years ago when they were both nine years old.

It began when they had to complete a school project for the summer holidays. However, they did not have a subject to write about until the hedgehog’s fact inspired them.

“We couldn’t afford to go on holiday that year. Kyra said, ‘What am I going to write about when I go back to school next year?’ It started as that,” Kyra’s mother, Helen Barboutis, 42, told Huffington Post.

Together with their parents’ support, Kyra and Sophie built mini-clinic in their sheds and recruited local vets to help with medical support.

So far, they have managed to rescue about 400 hedgehogs in just four years, thanks to the mini-clinic they set up and operate around the clock for 365 days a year.

One of their memorable moments of their hedgehog patients was when they came across a hedgehog which appeared to have an abscess on its head that looked fatal. Kyra had to spend more than an hour to remove maggots from the abscess.

Luckily, the hedgehog survived for the night and Kyra later took it to the vet for further treatment.

They also take abandoned baby hedgehogs or hoglets into their care.

Since hoglets need extra attention and care, the girls will tend to them immediately after school, making sure they are fed well in the evening and again at 6 am.

As much as the girls have fun taking care of the sick and abandoned hedgehogs, they also appear to have fun naming their patients with celebrities’ names.

Do not be surprised to find that the girls have treated Bruce Quillis, Amy Spinehouse, David Hasselhog, Hoggy Willoughby, Dick Van Spike and Quilliam Shakespeare, to name a few, in their mini-clinic.

Great job, girls! Keep it up!

A heartwarming scene of two loving families in the same photo...