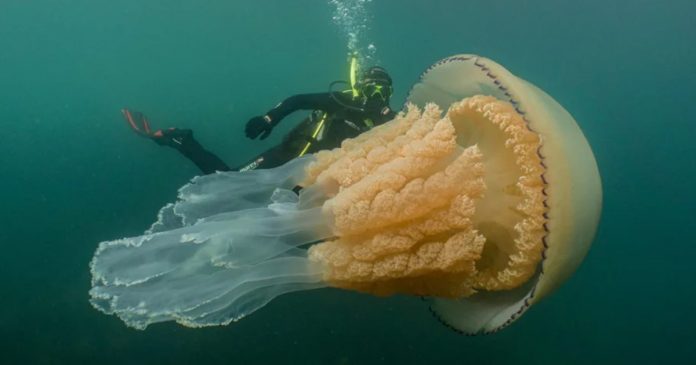 Sightings of a swarm of jellyfish swimming in the ocean may be common but imagine one as large as a human.

That was wildlife biologist and BBC Earth presenter, Lizzie Daly got to see when she was diving off the coast of Cornwall last week.

Daly was filming her dive for her project called “Wild Ocean Week”, a seven-day awareness campaign. The campaign was especially dedicated to celebrating oceans, conservation issues and also to raise funds for the UK’s non-profit The Marine Conservation Society.

That was when she bumped into the giant barrel jellyfish near Falmouth, a town on the coast of Cornwall in southwest England.

Fortunately, the breathtaking moment was captured by underwater cinematographer Dan Abbott in a stunning photograph which has now gone wildly viral on the internet.

In the now-viral photo, Daly can be seen swimming alongside the giant barrel jellyfish which is as large as her.

Daly also took the chance, later on, to share the wonderful photo with her followers on Twitter which shows her swimming next to the giant barrel jellyfish.

Woah!!!!! We went diving in Falmouth yesterday to finish off #WildOceanWeek and came across this GIANT barrel jellyfish! ? What a way to finish off this marine wildlife adventure! ? pic.twitter.com/NNwDelfWyV

The largest species of jellyfish in the UK, barrel jellyfish have eight frilled arms, all of which are covered in tiny, stinging tentacles.

According to The Wildlife Trust, despite its unusually large size, the sting of barrel jellyfish is typically harmless to humans. However, it may be best not to touch it as they are still capable to sting humans even when they are dead.

Watch the amazing moment when Daly gets to swim with the giant barrel jellyfish here.

Diving with a giant barrel jellyfish in Cornwall to celebrate the end of #WildOceanWeek ?Massive throw to Sharkman Dan for the wonderful footage Spend 2 minutes of the end of WILD OCEAN WEEK watching this beautiful moment where I come face to face with a barrel jellyfish THE SAME SIZE AS ME while diving off of the coast of Falmouth ?So excited that I actually say 'Barrel Fish' instead of Barrel Jellyfish ha!!!What an INCREDIBLE experience – both Dan and I have never seen anything like it. I couldn't think of a better way to finish the week in celebrating our incredible oceans.For anybody who is in Cornwall do come on down to Maenporth tomorrow at 12pm for a beach clean. There should be a good crowd of us rounded up now so it will be fun – and it will be followed by a small talk about the trip! See you THEN xMarine Conservation Society Cornish Diving CentreThe Wildlife Trusts @Cornwall Wildlife Trust Falmouth Cornwall UK