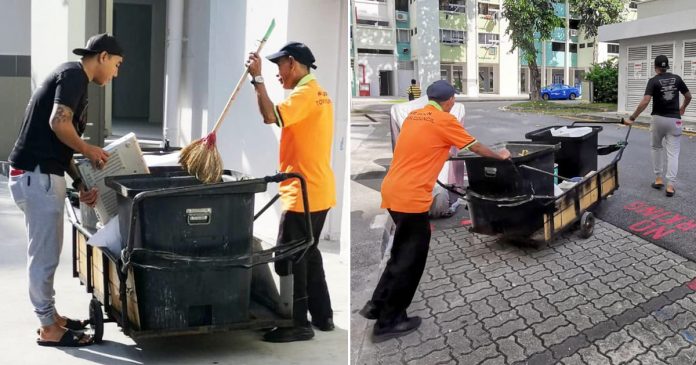 A Singaporean man’s Facebook post about his father has drawn praise from many netizens as he highlighted the role of his father as the “perfect role model” in his life.

Ayie Ahbotz wrote in his post which he dedicated especially for his inspiring father on how much his elderly father taught him about life.

He pointed out that while many chose movie stars, motivational speakers, and athletes as their role models in life, Ahbotz wrote he was proud to have his father as his role model.

“A role model is a person who has positively influenced someone in life, and is not a person filled with selfishness and greed,” he began his post, referring to his father.

In his moving post, Ahbotz wrote how his father stayed responsible and supportive of him and his siblings despite not earning much as a cleaner.

“He will do whatever it takes as long as he gets his responsibilities done,” Ahbotz wrote, saying that his father taught him about life as he led by example.

“He doesn’t tell me how to live but show me how he lives the life instead,” he continued.

“The way he overcomes life has taught me that no matter how hard things are, you have to keep going. No matter how little your salary and how hard your job is, for as long as it is right, you just have to get it done.”

The devoted son also shared some of his photos with his father who works for Nee Soon Town Council.

Ahbotz continued further that he encouraged everyone to recognize the “hard work and determination” from their family members to “understand the struggles that they are facing and help break the hardships.”

“You never know that you will be the only one who could help or rescue,” he wrote.

At the end of his inspiring post, Ahbotz ended with a message to every reader to cherish their loved ones before it was too late. “PS: Cherish those who you have in your life because you never know when they won’t be around anymore,” he wrote.