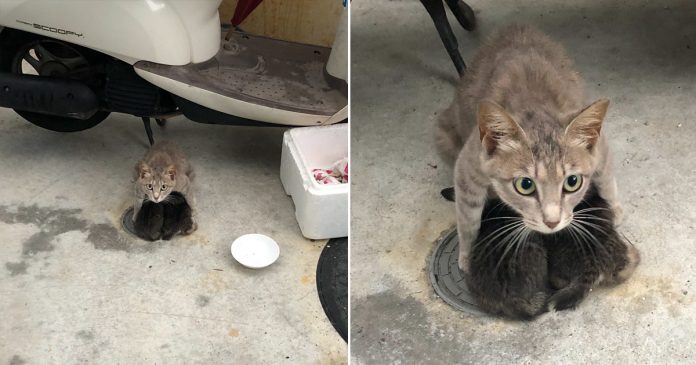 A heartwarming photo of a mother cat shielding her kittens from the rain in Japan has melted thousands of hearts on the internet.

As Japan is being hit by the monsoon season, many people are struck by the heavy rain and floods including Japanese twitter user who goes by the username Babariku (@yLOedElQfsyMXmK).

The user from Kyushu was on his way to visit his school to handle some critical issues when he realized that the monsoon season did not just affect the residents but animals in his neighborhood.

According to Sin Chew Daily, Babariku noticed a cat was taking refuge from the heavy rain under a motorcycle while he was on his way to his school.

The adorable cat sparked his curiosity so the user decided to approach the feline and that was when the user caught a sight that had totally warmed his heart in the middle of the cold weather.

It turns out that the adorable cat was a mother cat who was trying her best to protect her two kittens from getting wet by the heavy rain.

In the series of photos that Babariku captured, the mother cat can be seen staring at the user with her lovely round eyes as she shields her black kittens with her two arms.

It was uncertain how long she had to wait for the rain to stop but one thing for sure, the mother cat would never let her kittens get wet from the rain at all.

The mother cat’s sacrifice and unconditional love for her kittens had not only touched Babariku’s heart but also 784,000 hearts online.

As soon as the photos were uploaded on Twitter, they quickly went viral and garnered over 180,000 retweets and hundreds of comments from the netizens.

We hope that the mother cat managed to find a dry and safe place for her and her two cute kittens in this rainy season!