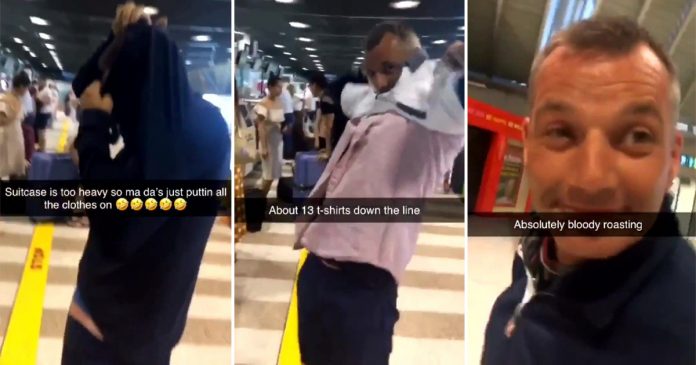 When you’re one of the heavy packers but refuse to admit it, you’ll try your best to get out of it and might end up like this man at the airport. Conventionally, having over-the-weight-limit luggage when you check-in at the airport counter only means one thing—paying the excess baggage fees.

However, according to Mashable, John Irvine from Scotland refused to pay extra money for the eight kilograms of clothes that he had and came up with one idea to avoid the extra payment by all cost.

Coming from Glasgow, Irvine turned up at the Nice airport in France only to find out that his luggage was overweight and he was clearly told that he needed to pay an extra fee—which he completely disagree.

So Irvine started to pile on 15 clothes and sweaters instead of forking out more cash to pay for the extra fee.

In the video recorded by his son Josh, Irvine was seen layering the pile of clothes on his body while he was waiting in the line.

“The lassie at the counter asked us if we wanted to pay extra but my dad just looked up at her and said ‘Hen, watch this’ and zipped open the suitcase and quickly flung on about 15 jumpers to help cut down the weight. My ribs were sore from laughing,” told Josh about the incident.

Traveling from Nice to Edinburgh, Josh can be heard laughing at his father as he started to wear the clothes that exceeded the luggage weight limit.

With his questionable decision to avoid the extra fees, we hope Irvine didn’t end up with heatstroke.

“The staff were in stitches but trying to get through the security was a struggle because they thought he was trying to smuggle something under all his clothes. Thankfully we got through eventually.”

Mashable reported that it turned out that this is not the first time people are pulling this trick of piling clothes on themselves to avoid extra baggage fees. One woman was claimed to successfully evade the extra charges after by wearing seven dresses, two pairs of shoes, two pairs of shorts, a skirt, and a cardigan.

Suitcase was over the weight limit in the airport so ma Da whipped oot aboot 15 shirts n wacked every one a them on to make the weight?????cunt wis sweatin pic.twitter.com/7h7FBgrt03

For those planning for a holiday, be sure to not pack excessively and avoid having to do this at the airport, okay?

18-yo girl dances with teddy bear ‘father’ in a heartbreaking birthday...