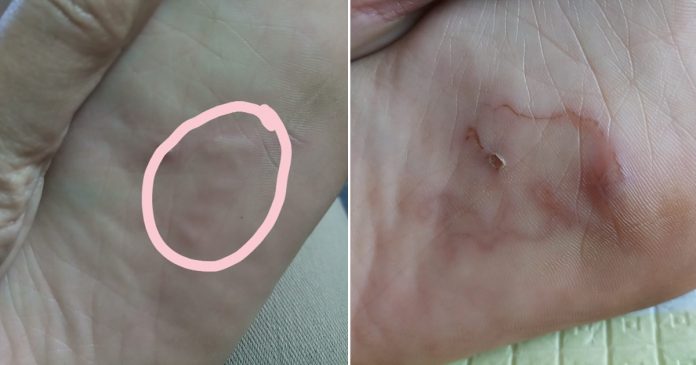 Beach is always a place where we want to feel free and just walk around barefooted—enjoying nature. However, this woman experienced her worst nightmare during her family vacation to the beach recently.

According to World of Buzz, Nurul Ezzatul Akma shared that she went for a vacation with her family at a beach in Malaysia and started to realize there’s something wrong with her foot after the lines at the bottom of her feet started bulging out as if it was swollen.

She initially thought it was only a blister caused by her slippers—until a small lump that looked like it was filled with moisture appeared on the sole of her foot.

Nurul went to the masseuse for a massage and asked her, but the masseuse concluded that it was a nerve problem. After the massage, Nurul noticed that the bottom of her foot was incredibly itchy. She also felt something moving in her foot every night as if there’s a creature dancing inside of her feet.

Not realizing how serious the thing that’s going on, Nurul posted the picture of the weird bulging lines on her foot on social media and asked if anybody knows anything about it.

To her surprise, a lot of people commented that it’s a worm because they’ve read about it before. Nurul finally went to a private hospital for a medical examination after urged by her family and friends. After the examination, the doctor asked if she’s been to the beach recently as it seemed that she had a worm burrowed into her skin.

The doctor confirmed that there’s definitely a worm in the sole of her foot and she contracted a worm infection—known as Cutaneous larva migrans due to walking bare feet on the beach.

The worm in her feet was identified as hookworm and the doctor verified that the cause of the worm was from cat or dog faeces. The doctor also explained how there’s a lot of worms at the beach because cats and dogs defecate around the area and the faeces would still be there because the sand on the beach is warm.

The worm was also said to be extremely dangerous as it is really small and thin as a thread and could go up to someone’s bloodstream if they were not careful.

Unfortunately, the doctor can’t remove the worm because they’re unable to identify the exact location of the worm. Nurul was prescribed with a medicine that she should consume for three days and required to go to a skin specialist to remove the worm if there no changes after taking the medicine. Thankfully, she can no longer feel the worm moving after the third dose of her prescribed medication and is on her way of recovery.

9 secrets on how Japanese women maintain slim figure and looking...