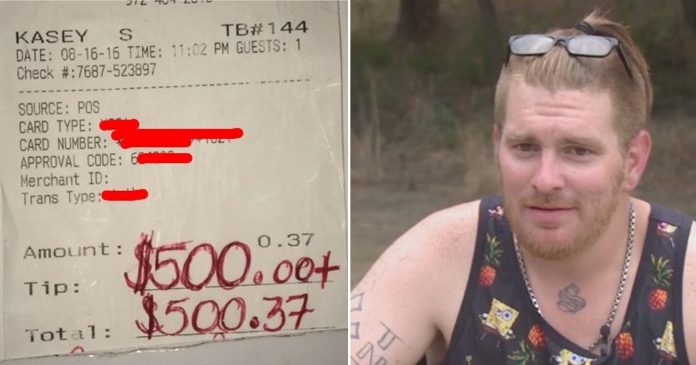 A kindhearted Applebee’s waiter in Texas offered to pay for a woman’s shopping to cheer her up and ended up getting a huge surprise the next day.

32-year-old Kasey Simmons works as a waiter at Applebee’s in Dallas. He had served a woman who ordered some flavored water which was the cheapest thing on the menu, coming in at 37 cents but she had left Kasey a monster tip of $500, but it wasn’t random.

It started a day earlier, Kasey was at a supermarket when he noticed an elderly woman who looked a little down. While other patrons of the supermarket ignored her, Kasey decided to try and cheer her up and he ended up offering to pay for her shopping.

A lady came in ordering the cheapest thing on the menu but left a $500 tip for the waiter.

The lady who left the tip also left a napkin explaining why she did it and it turns out, the woman Kasey tried to cheer up was the tip-givers mother. She says on the napkin that her mother had been feeling sad because it was the anniversary of her husband’s death.

She had left a note explaining why she did what she did and it’s truly heartwarming.

Kasey’s small act of kindness in trying to cheer her mother up at the supermarket made all the difference to her and completely brightened her day.

Her daughter wanted to return Kasey’s favor and left the tip and noted on the napkin, “On behalf of the Sullivan family, I want to thank you for being the person you are.”

She goes on saying, “On one of the most depressing days of the year, (the death of my father’s 3 year anniversary) you made my mother’s day wonderful. She has been smiling since you did what you did.”

Kasey never expected anything in return for his kind gesture so he was understandably surprised by the incident.

Tipping is a practice of giving certain service sector workers a sum of money on top of the payment for the service itself. The amount can span anywhere from 10% to 20% of the total payment depending on location and social custom.

This waiter was stunned to see how much a customer had tipped him.

Watch the story covered in the video below: