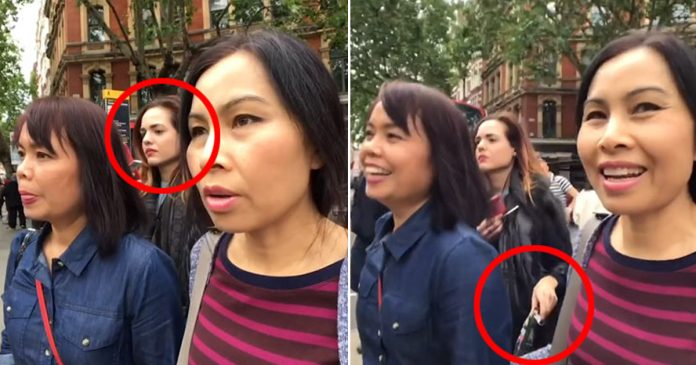 When Nina Spencer and her friend Toi visited London, they wanted to commemorate their special visit by filming their trip. The two had never thought that they would accidentally film how a female pickpocket gang robbed them in broad daylight.

Nina and her friend were walking through Cambridge Circus, filming themselves on a selfie stick as they enjoyed sightseeing the capital.

However, when she looked at her Louis Vuitton handbag to search for her purse, she realized that it had gone missing along with £400 cash and her credit cards.

Devastated by the news, they played back their video footage from when they started sightseeing around Cambridge Circus in an attempt to locate the missing purse and its content.

That was when they discovered that they had been pickpocketed by a female gang when they were waiting for the traffic light to change to cross the road.

In the video, a woman dressed in a black jumper and a pair of sunglasses can be seen looking over Nina’s shoulder while her friend who wears a black leather jacket and holds a red smartphone is eyeing Toi’s handbag.

As Nina and Toi are distracted by their vlogging, the two thieves work together with the woman with the sunglasses blocks her friend’s hand in action with a large shopping bag.

Then, the other woman who wears the jacket dips her hand into Toi’s handbag and pulls out her purse.

The two thieves are then joined by their accomplice who holds an orange coat as she walks behind Toi and Nina to gather the stolen purse under the coat.

They then walked in a different direction, leaving Toi and Nina unaware that they had just been pickpocketed in broad daylight in the middle of London.

Toi and Nina quickly filed a report to the local police but according to Viral Press, they did not manage to get their stolen purses back.

“We don’t think it’s possible to have the money back now. But we just want to be helpful and let the police be aware of things going on in the city,” Nina said.

It is estimated that around 600,000 pickpocket incidents occur every year in the UK with pickpocketing thefts had increased to 20 percent in London between 2010 – 2012.

While tourists are often targeted for pickpocketing thefts, tourists can avoid drawing attention to themselves by not wearing flashy outfits or signalling where they put their valuables.

“Somewhat counter-intuitively, travelers can also make themselves more vulnerable by being obviously over-protective of valuables. By constantly patting your pockets to check on your wallet, you are signaling to very observant pickpocketers that the pocket contains something of value,” said Lewis Sage-Passant, MSyl, a former British military intelligence officer and director of travel security firm How Safe Is My Trip.