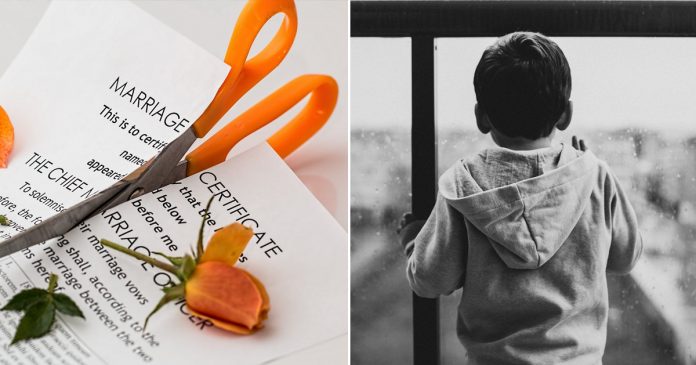 A few years ago, a husband went through a rough patch at work and was fired. He started drinking in order to cope with his disappointment and although he found another job eventually, his drinking persisted. His addiction had caused a rift in the couple’s relationship as his wife started reprimanding him and increasingly nagged him to stop drinking.

He yells and complains when he’s drunk and they bicker all the time. Their animosity towards each other is starting to affect their son.

This had been going on for years and the husband has just enough of it. He was sick and tired of his wife’s complaining and nagging that he resolved to get a divorce.

Before he went ahead with it though, he brought up the idea with his son. “Mom and I are always quarreling, it’s better to be apart than to shout all the time.”

The son replied, “I used to quarrel with my classmates and the teacher told me, ‘you don’t care about others, you have to change your bad habits first.’ Dad, I don’t think you care about mom, why don’t you try changing your bad habits.”

He looked at his child in disbelief as the words finally hit him.

His son was right, he had to change his ways. He decided then to try and curb his addiction before petitioning for a divorce.

His withdrawals were terrible but he pushed through and tried to keep his mind off alcohol. He had trouble sleeping at night as he tossed and turned in bed, craving a drink. He would get up and watch a DVD or eat a snack to distract himself. His wife noticed the fact he was trying earnestly to change.

She came home one day and placed a large bottle in front of her husband saying, “Drink this before going to bed, it will help you sleep” and she walked away. Her gesture surprised him.

From then on, things started to improve, their family dinners were quiet, they hardly quarreled anymore and a sense of warmth returned to their home. Slowly, they started to mend their relationship. The husband threw the thought of divorce out the window.

Later, the wife was very moved when she saw her husband has successfully quit drinking. She began to reflect on herself, “Is it because of my rude behavior that my husband feels no family warmth at home and always drink with others?” Thinking of this, she was naturally more understanding of his husband.

When both of them begin to reflect on themselves, it means that the worst time in their marriage had passed.

They learned to respect and love each other again and after persevering through tough times, their relationship is stronger than ever and their son has never been happier.

Most couples blame each other for the failure of a relationship without taking a step back to examine themselves. Often times all you need to do is to let go of your pride to see things as they are from the point-of-view of a child.

Her selfish father tried to get rid of her for quick...