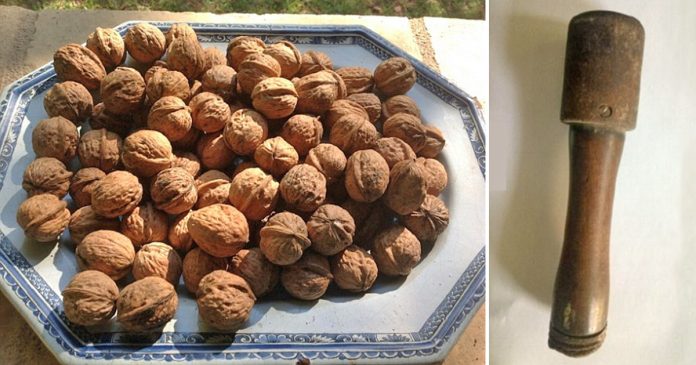 After receiving a weird-harmless-looking tool as a gift from his friend, a man from Ankang, Shaanxi province, China has been using it diligently to crack his walnuts. Little did he know, he was putting his life in danger all these years.

According to Daily Mail UK, the villagers stated that the man has been using the tool to specifically crack open the nuts for 25 years without realizing what it actually was. One day, the man was handed a leaflet by the local police when he was at home. The leaflet contained a list of objects that were illegal to possess.

That was when the man realized that he indeed owned something that looks exactly like one of those illegal things to possess—the one he’s been using to crack his walnuts for years.

Shockingly, it turned out that the tool he’s using to crack the nuts was a hand grenade!

Fortunately, the hand grenade didn’t detonate during all those years of hitting nuts. Grenades usually explode when the safety lever is released and the object is thrown away. As it rotates, it detonates the primer and ignites the fuse before burning down the detonator.

Lucky enough, all that didn’t happen despite the man persistently hitting walnuts with it.

However, the police were not sure whether the tool still contained explosives during that time. As the news circulated, many people can’t help to wonder why his friend would gift him a dangerous item. But a lot of them are also assuming that the friend is just as clueless as the man was.

It’s time to buy a new nutcracker after this.