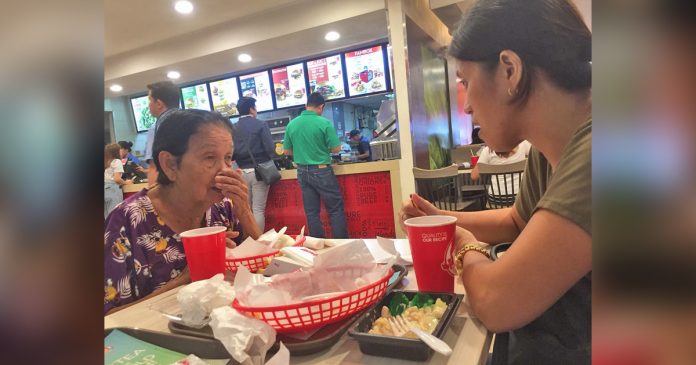 One day, a woman known as Yvonne was having a regular meal with her mother at a famous food chain outlet in the Philippines when they were approached by an elderly woman—and it turned into an unforgettable meal to her.

According to Mothership, while Yvonne and her mother were at the food chain, an elderly woman who used a cane as her walking support approached them to ask for help. Yvonne’s mother kindly asked the elderly woman if she already had her meal as it was lunchtime at that moment. To that, the elderly woman answered that she didn’t have her lunch yet.

Without hesitation, Yvonne’s mother generously bought the elderly woman a set of the meal and invited her to sit and dine with them at the table.

While the elderly woman that Yvonne refers to as Lola (which means grandmother in Tagalog) is having her fill, they chatted and found out that she was in desperate need of help.

The 85-year-old grandmother shared that she had come all the way from another province to get help for her sickly husband. It turned out that the elderly woman’s husband needs four bags of blood for his treatment. Unfortunately, he currently only has two bags—which is clearly not enough. Upon hearing the heartbreaking story, both Yvonne and her mother can’t help to tear up and sympathize with the elderly woman.

“She came from Laguna Provine and then I saw my mother crying a little, so I cried. Then my mother gave her money for her to buy blood. My mother has the kindest heart, really. Take care of yourself, Lola,” wrote Yvonne in her tweet.

Seeing how the faith in humanity is restored in her story, Yvonne’s tweet went viral and has been garnering more than 16,000 likes and almost 4,500 retweets.

so this lola approached us and asked for us a little help because her apo needs 4 packs of blood but they only have 2, so my SOFT mom asked if she had her lunch already, lola said no so momma bought her lunch and talked to her,,,, she is 85 yrs old na omygosh ☹️☹️ ++ pic.twitter.com/53BVy1OsBy

Some people are also praising Yvonne and her mother for their kind gesture.

Hopefully, the grandmother will be able to find blood to help her sickly husband complete the treatment soon.