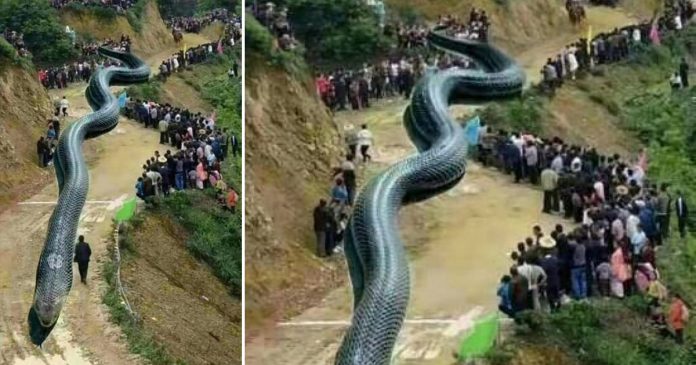 Recently, locals in Yibin county in Sichuan Province, China were shocked by a 6.0-magnitude earthquake on June 17.

The tragic natural disaster was then followed by several aftershocks with people being trapped under collapsed buildings, causing at least 12 casualties and left 134 others injured, according to Mothership.

However, a 50-year-old man in China seems to have taken advantage of the natural disaster and the grieving victims by spreading insensitive rumors that the earthquake was caused by a giant dragon.

The edited image shows a crowd standing on both sides of a road with a giant snake emerging from the hillside with a caption that read: “The earthquake was caused by a dragon.”

The photo was uploaded by Zhang to Weibo on the first week of July.

In the original post, the caption read: “An earthquake took place in Yibin has caused severe debris flow. A 120-meter dragon with a diameter of 1.5 meters jumped out of the water at 2 pm today, attracting thousands of people. Experts have flown here and said that this dragon has something to do with the earthquake.”

As the photo was uploaded after the earthquake struck Sichuan on June 17, it quickly went viral on Chinese social media and caused “huge panic” among the locals, according to National Business Daily.

Even though it is poorly manipulated, some people were convinced that the rumor was true. “It’s photoshopped but I believed in him,” one netizen commented.

“My grandma told me about this. She was upset after I told her that it was fake, saying that other people have seen it, and that it’s my problem for fooling her,” wrote another netizen.

Meanwhile, there were some netizens who were quick to point out that it was fake. “It’s so obvious that it’s fake. Why would people still believe it?” one netizen commented while another wrote, “It’s more like an IQ test.”

Nevertheless, Yibun Cyber Police immediately responded to the rumors and arrested Zhang on July 3 in Chongqing, another city in Sichuan, according to the police’s official Weibo page.

He confessed that he “did it just for fun” and later wrote a written apology for his reckless behavior.