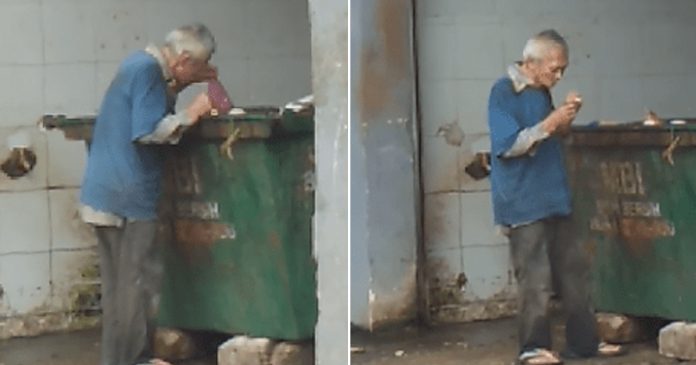 It is simply a wish for many to live a comfortable life surrounded by their loved ones when they reach golden years but apparently, not many could afford to turn their wish into a reality.

A recent viral video on Facebook shows a homeless, elderly man scavenging a huge garbage bin for some leftover food in Perak, Malaysia has tugged at many people’s heartstrings.

The homeless man who appears to be desperate and hungry spends his time scavenging the trash for some food near UTC Padang Besar in Ipoh, Perak.

He clearly does not care much for the attention he receives when he is looking at the discarded waste, trying to find something edible enough to be eaten.

In the video, the man can be seen smelling each leftover before quickly eating it when it seems edible.

He is also seen holding a plastic bag in one hand, probably to use it to get as much as leftover he can for the rest of the day.

It may be disgusting and off-putting to most people but the man had to do what he could just to survive for another day including eating the leftover from a waste bin.

Nothing much was known about the elderly man but it was believed that he was a homeless based on his scruffy appearance and frail body apart from the fact that he scavenged the huge trash bin for some food.

When the video went viral on the internet, the netizens urged those who may have known the elderly man to help him and provide some food and shelter.

Some netizens even commented that the man should be sent to a senior center instead of him having to live on the streets and survive on leftovers from the bin.

Behind the face of a crying young girl who works as...