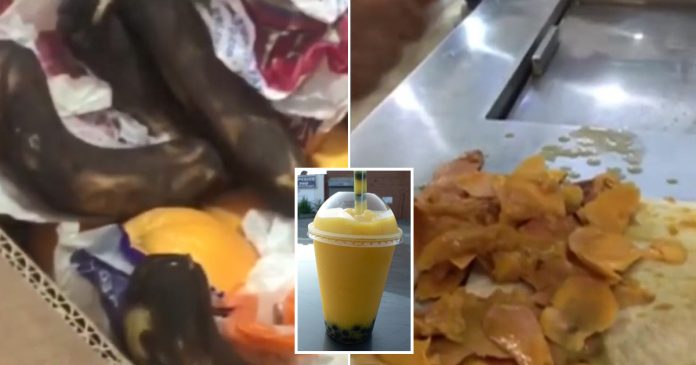 With it being as one of the crowd favorites at the moment, the last thing most of the customers would expect is to find out that their bubble tea chain uses rotten fruits and adopts unhygienic practices.

Unfortunately, that was a reality for a popular bubble tea chain in China when they were exposed for their unhygienic practices and producing drinks that were unsafe for consumption.

In the undercover investigation, the reporter worked as a staff at the bubble tea chain at one of their Beijing’s outlets and shocked to find that the staff used rotten fruits to make drinks for customers.

Even more shocking, it appears that the store manager was the one who instructed the staff to use rotten fruits and did not care whether or not the staff practiced good hygiene when preparing drinks.

All of the evidence of their unethical behavior was recorded secretly by the reporter.

It also included the time when the staff members were seen using their bare hands to handle equipment right after they had touched rubbish or their mobile phones without washing their hands first.

The footage also reveals that the staff cut fruits without gloves and pick up dirty spoons from the sink to mix the drinks.

Just when you think it cannot get any worse, the footage also shows the manager advised the staff members to add water in the drinks to maximize profits, use all fruits despite they were visibly rotten and keep selling the unsold juices in the fridge.

“Put it in the fridge to get rid of the smell and mix it with the good one,” was what the reporter was told when she was taught how to make a drink and given mushy and rotten mangoes.

According to the report, the reporter only saw one mango that was edible and unrotten. The staff members also used the juices left on the chopping board to add into the drinks!

“I was going to swap it out with good fruit, but the shop manager made me use the bad one instead. It doesn’t sit well with my conscience. I feel evil. I used to like milk tea. Now if you give it to me for free, I won’t be drinking it either,” one of her colleagues confessed.

Following the report made public and went viral in China, Tealand has since closed down the outlet and launched an investigation into all of their 33 outlets.

Their headquarters in Hangzhou has also released a statement on their website and apologized for their mistake.

Watch the full video of the undercover investigation here.