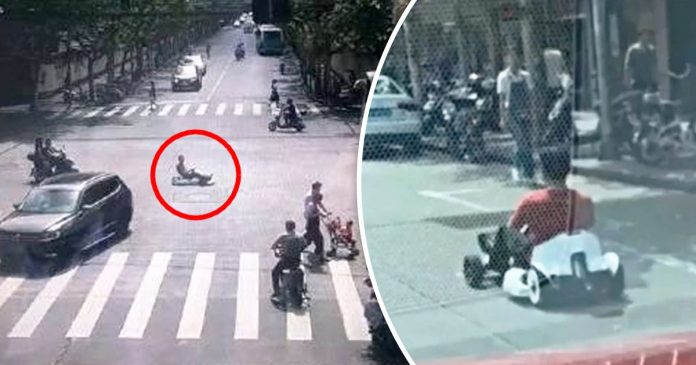 Just a few days ago, the internet was surprised with hilarious footage showing a man in China driving an electric toy car on a busy road.

It was reported that the toy car actually belongs to the man’s 6-year-old granddaughter.

As caught on surveillance cameras, the man who was identified as Ye can be seen driving the electric toy car on the road along with other riders and drivers.

The incident which took place on June 23 began after Ye who was spending his free time accompanying his granddaughter to play with her electric toy car nearby their home received an urgent call from the office.

He was apparently needed to go to his office immediately for an overtime shift.

However, the problem began when he realized that he did not have much time to return home and drive his own car.

Ye then decided to borrow his granddaughter’s toy car and drove it all the way to his workplace.

What makes it even funnier is when Ye had to correct the position of the electric toy car after it got stuck on the road.

According to Ye, he admitted that it was an impulsive decision and he did not think through when he decided to drive the electric toy car to work.

“At that time, I made the decision without thinking it through so it did not cross my mind the consequences of my behavior,” he said.

He also admitted that his decision to drive the electric toy car on the road could have posed a greater risk of accident to other road users.

Following the incident, the Baoshan police have seized the electric toy car that Ye drove as he had violated Article 74 of Shanghai’s traffic laws. He was also fined 1,000 Yuan (US$ 145).