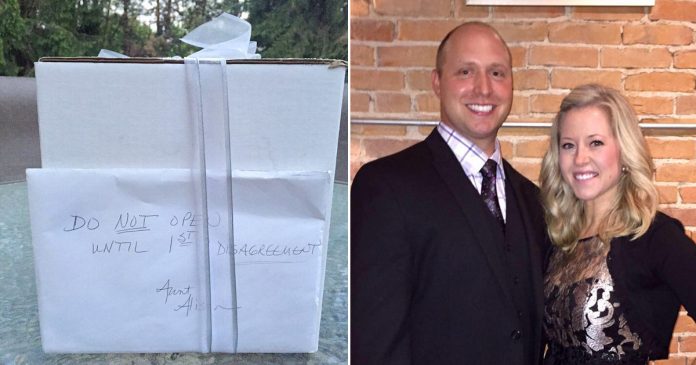 Kathy and Brandon Gunn have been married for nine years but they still have yet to open one of the many wedding gifts they received when they tied the knot.

The gift which was given by Kathy’s great aunt, Aunt Alison came in a white box and it was left on top of a shelf in their closet for many years.

However, it was not because the couple did not appreciate the gift. Rather, it was Aunt Alison’s request for the gift to be opened only after the couple’s first disagreement.

“Do not open until first disagreement” was what written across an envelope attached to the wedding gift.

When Aunt Alison first gave the gift to Kathy and Brandon, they agreed to honor her wish and decided to not open the gift until their first fight.

Obviously, there have been plenty of disagreements and fights throughout their 9-year marriage but both Kathy and Brandon never opened the gift.

“I honestly think that we both avoided turning to the box because it would have symbolized our failure. To us, it would have meant that we didn’t have what it takes to make our marriage work – and we’re both too stubborn and determined for that.”

“So, it forced us to reassess situations. Was it really time to open the box? What if this isn’t our worst fight? What if there’s a worse one ahead of us and we don’t have our box?!? As my Great Uncle Bill would say, ‘Nothing is ever so bad that it couldn’t get worse,’” she added.

One night when the couple was thinking about what to get for a wedding in Kalamazoo, Kathy recalled Aunt Alison’s gift which left her a lasting impression.

They then decided to open the gift. As soon as they opened the box, Kathy and Brandon saw two letters, one letter was addressed to Kathy and the other one to Brandon.

There was even some cash inside the letters.

“Go get a pizza, shrimp or something you both like,” the letter to Kathy read.

While in Brandon’s letter, it told him to “Go get flowers and a bottle of wine.”

Along with the letters, there was a crystal flower vase, two crystal wine glasses, a bath soap, lotion and bubbles, all for the time when the couple supposedly needed them the most.

“All along, we assumed that the contents of that box held the key to saving a marriage – an age-old trick – unbeknownst to us rookies,” Kathy wrote.

Kathy added that it was not the content of the box that meant much to her, it was the meaningful message behind it.

“After all, my Great Aunt and Uncle had been married for nearly half a century. So, we thought the box would save ‘us’ – and in a way it did.”

Instead of opening the box in the early days of their marriage, both Kathy and Brandon decided to fix their problems and find solutions to their arguments which has helped strengthen their marriage all these years.

What a thoughtful gift by Aunt Alison!