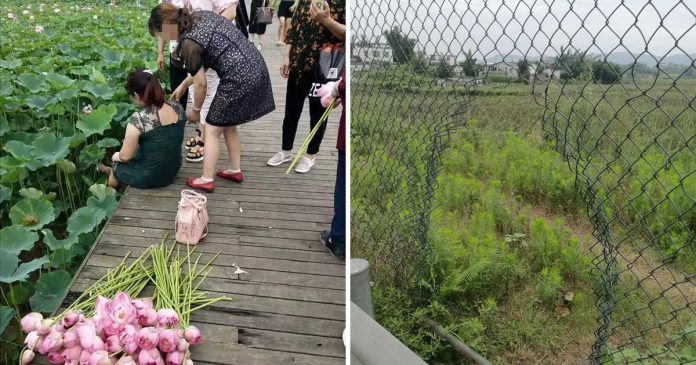 The Longqiao Cultural and Ecological Park in China will be closed for the rest of 2019 tourists stripped it bare of its lotus flowers.

According to South China Morning Post, the park which is located in Sichuan province are covered with lotus plants with their blossoming flowers of about 250,000 square meters.

The park was actually closed in March due to construction work and was due to open this summer to the public.

However, the plan fell through after the park managers were forced to postpone the opening due to hundreds of tourists broke into the park and stole the lotus flowers.

Photos that appeared on Weibo show tourists climbing fences or digging holes under the fences to enter the park illegally.

Some of the photos also show the tourists cutting down the lotus flowers for themselves.

Even though security measures had been taken such as security guards on patrol, a staff member of the park said that it did not stop tourists from breaking into the park.

“We cannot control the tourists,” the staff said. “We can just guarantee we’ve done our job well. We’ve put notes on the park gate and near the flower field and we have security personnel on patrol as well.”

The staff added that due to the incident, it was rather useless to re-open the park to the public as there is are no lotus flowers left.

It appears that almost all of its lotus flowers have been stripped off the park by the unruly tourists.

It is estimated that about 200 to 300 tourists are still breaking into the park to strip the lotus flowers off for themselves.

It is not confirmed when the park will be opened to the public next year after the incident happened.