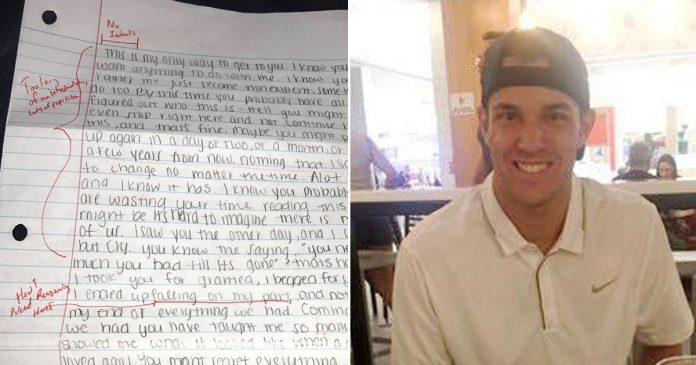 College student Nick Lutz recently received an apology letter from his unfaithful ex-girlfriend who claimed that she never cheated on him.

However, it seemed that her letter may be one of the many reasons why Lutz will never get back with her.

After their break-up recently, his cheating ex-girlfriend sent him an apology letter, claiming that she had never cheated on him.

Nevertheless, Lutz who seemed to have enough of the cheating drama decided to respond to her letter in the coldest way he could think of!

When your ex writes you an apology letter so you grade it to send it back pic.twitter.com/MczdjcCiil

In his case, Lutz only needed a red ink pen to serve his revenge. He then graded his ex-girlfriend’s letter, pointed out its many errors and left a final sharp comment:

“Long intro, short conclusion, strong hypothesis, but nothing to back it up. Details are important. If you want to be believed, back it up with proof.”

He began to point out the poor choice of format that she used to write the letter.

Then, he continued by pointing out the several grammar mistakes that she made in the letter.

Lutz also criticized her use of “useless fillers”! Well, after all the grammar mistakes, the wrong format that his ex-girlfriend used to write the apology letter and the trust which had been broken, Lutz gave her a final grade of D and a score of 61 out of 100.

However, that was not the end of it. Lutz also included his comment at the bottom of the letter.

“Long intro, short conclusion, strong hypothesis, but nothing to back it up. Details are important. If you want to be believed, back it up with proof. You claimed that cheating never occurred, but place blame on yourself, then what for?

Need to stop contradicting your own story and pick a side. While this gesture is appreciated, I would prefer details overstatements.

Revision for half credit will be accepted. Good luck!”

Lutz then posted the graded letter to his Twitter account with an intent to share it with his friends but his post quickly blew up as many people were entertained by his response to his cheating ex-girlfriend.

there were quite a few missing apostrophes in contractions, if you wanna count off points for that too 🙁 ?

.@NickLutz12 I think you're a little young for me, but this makes me want to date — not cheat on — you.

Let us hope that his ex-girlfriend will at least fix her errors in her letter if she is not going to stay faithful in a relationship and for Lutz to move on and find himself new love.