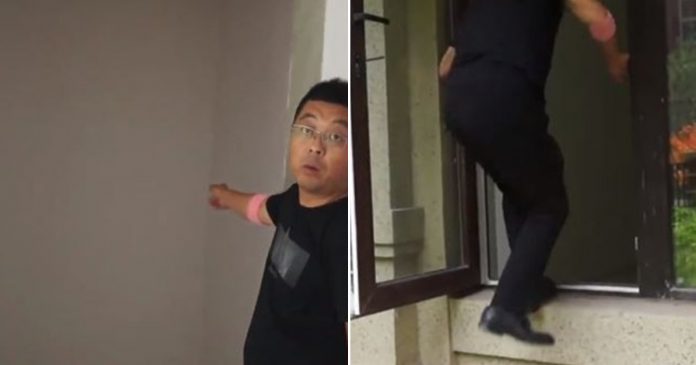 One man from China was dumbfounded after he found out that the high-end residence that he just purchased has the window as the only entrance.

According to See Hua Daily News, the man who was known as Mr. Lin had just bought the house that came with a price tag of 49,783 Chinese Yuan (US$ 7,243) in China. He first purchased the house before the construction was completed.

However, when he received the keys to his house, he was surprised to find out that he had to use the window to enter his new home.

The surprising revelation came after he discovered the elevator which took him to the floor where his house is located could not be opened.

When he tried to open the elevator doors, he found out a cement wall was blocking the elevator.

He later made a complaint to the developer but they told him that he did not have any other options but to enter his house through his window.

Mr. Lin believed that the entrance to the elevator was blocked and the developer did not build the entrance to his house to maximize the space for a more spacious house.

Before he signed the agreement to purchase the house, he was told the elevator would take him directly to the entrance of his new house.

Unfortunately, that was no longer possible as the entrance was blocked with a wall!

“I did not expect to receive the house in such a poor state with no doors when I got the keys,” Mr. Lin said.

“Do I have to jump out of the window like a thief every time I want to leave the house?” he continued.

It was not confirmed how Mr. Lin will deal with his new house but it looks like he really needs to use the window to enter and leave the house for the time being!