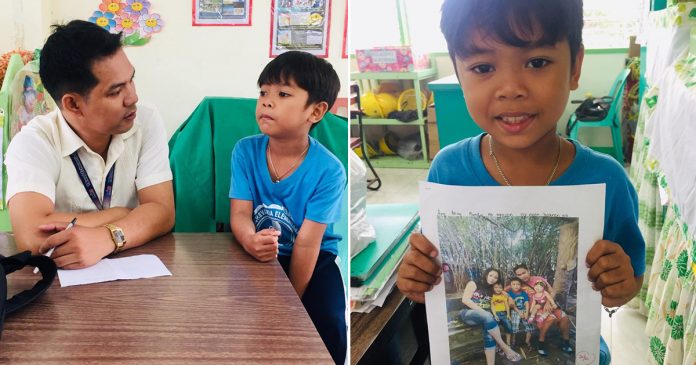 When Arnold Legara Cuevas told his students to bring their family photos to class, he never expected to be surprised with a heartbreaking story from one of his students.

Cuevas who works as a teacher at T. Awad Echevarria Elementary School in Davao City in the Philippines gave his students a simple assignment — bring a family photo of theirs to the school, according to Buhay Teacher.

However, when he saw Rheann Khinn Cabahog’s assignment, it broke his heart after realizing that the boy had just lost his entire family in a fire on March 12, 2019.

What seemed like a simple assignment for him was now a bittersweet memory for the boy.

In his assignment Khinn submitted to his teacher, the boy wrote how he once had a happy family but that was before the fire took his family members’ lives and he now had to live on his own.

Cuevas who was surprised by the unexpected tragedy later asked the boy about what he wrote.

He later learned that while the boy lives with his grandmother in Davao City, all of his family members, his parents and his siblings were living in Isabela.

Just before the tragedy struck, Khinn’s father requested to transfer his son to Isabela but his class adviser Josephine Echavez Sumarago did not agree to the idea, saying that it would be best for Khinn to complete the school year first before moving to Isabela.

Unfortunately, his family never got to see Khinn again after they lost their lives in a fire a few days later.

According to the boy, his family was sleeping when the fire broke out. Khinn said that he would have lost his life as well if his class adviser had agreed to transfer him to a school in Isabela.

Even though Khinn is now an orphan and said that he missed his family so much, he does not lose his hope just yet as he still has his grandparents and friends who care for him in Davao City.

It must be devastating for Khinn to accept the tragedy but everything happens for a reason. Stay strong and never give up, Khinn.