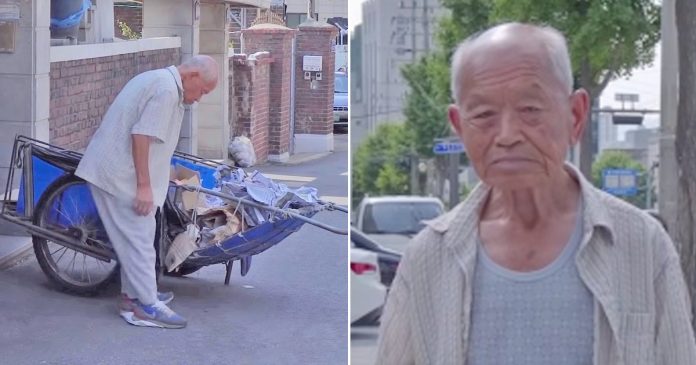 The elderly usually spend their time resting and spending time at home, but this Korean war veteran is gaining attention as he still needs to works to make ends meet.

This old veteran Park Rae Jung who served in the Korean War is living his life very differently from other people his age. At the age of 88-year-old, Park is still working hard all day long pulling a small cart filled with used boxes.

This is the Korean War veteran, Park Rae Jung.

In order to support his wife who is not able to walk comfortably, AllKpop reported that Park works as long as 11 hours a day. Even more heartbreaking, the old man only earns about 15,000 KRW (US $13) a day despite his long hours of work.

With the extremely small amount of money he earns every day, Park saves expenses by smoking discarded cigarette butts on the ground and eating lunch meals that only cost him 200 KRW (17 cents).

However, Park lives with such a strong and positive mentality as he mentioned that there are more people who are living a more unfortunate life than him. Hence, he’s sincerely feeling fine and totally okay with his instant noodles dinner.

He also said that he likes instant noodles.

Looking at this heartbreaking scene, Korean YouTuber Jin Young Jin decided to give him 1 million KRW ($866) to help him pay for his living expenses. However, Park’s response is something we least expected.

“I don’t know if I should take it because I haven’t done anything,” said Park as he expressed a sorry heart for accepting the money.

The netizens have currently started a petition stating to improve the conditions of all veterans who have helped serve the country.