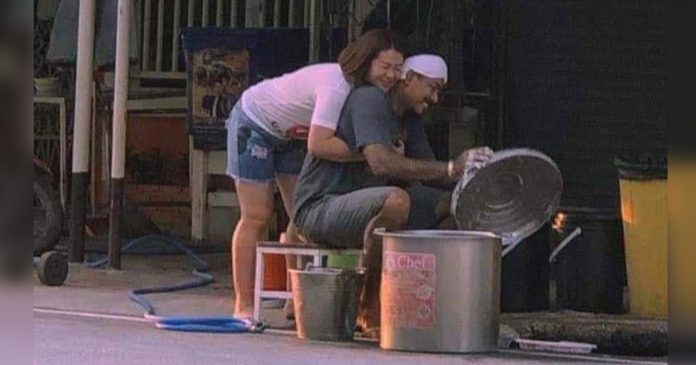 Many people tend to associate money with happiness but this lovely couple proves that even the companion of your loved ones can bring contentment to your heart.

In a photo that has moved thousands of people recently, a loving couple appears to be enjoying their moment together on a roadside.

The photo which was posted on Facebook on June 25 shows a woman giving her partner a hug from the back and resting her head on the man’s shoulder as she smiles.

It's more important to be happy than to be rich. ❤

Meanwhile, the man, who seems like he was washing the dishes at work looks absolutely delighted at the sweet gesture shown by the woman.

Alongside the photo, there was a caption which read, “It’s more important to be happy than to be rich.”

It was not stated where the photo of the cheerful couple was taken but the sign placed at a shop in the background suggested that the photo might have been taken on a street in Thailand.

The photo may not have anything extraordinary but the true happiness between the couple it captured was enough to make netizens in love with it.

The couple’s faces proved that not fancy clothes or a romantic, lavish dinner that makes one happy but just pure love they get from their partner.

When the photo first made rounds on social media, many agreed that being content was more important than being wealthy with one netizen commented that nothing could buy love.

“Money is happiness and it’s priceless,” the comment wrote. Meanwhile, another netizen defined what true happiness is.

“True happiness is when you have inner peace and money brings you none,” the netizen wrote.

During times when materials and money seem to hold a higher place in our society, this couple reminds us that it is always important to cherish our loved ones and something that not even money can buy — happiness.

Baby Orangutan that was found near death inside a cardboard soaked...

This 91-year old man was pronounced dead for 10 minutes, then...