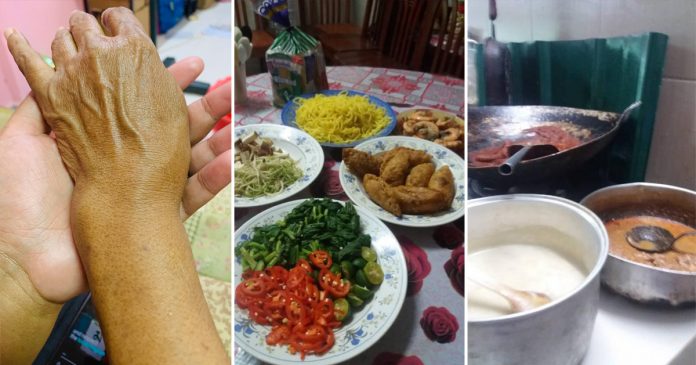 Eid is a celebration of bliss and happiness, and some people just go the extra length to entertain their quests—even when she has a broken wrist, as the opportunity to spend time with the closest family rarely comes.

A girl named Laila Jamil shared a heartbreaking incident that happened to her mother during the Eid celebration in her house. With a broken wrist, Laila’s mother woke up very early, gathered all her strength and cooked for her relatives that claimed they will come to visit them for Eid.

Laila shared about the incident in her tweet and it went viral with more than 33,000 retweets.

Not to disappoint her upcoming guests and excited to see them after so long, Laila’s mother cooked many delicious and not-easy-to-cook dishes such as Prawn Mee, Biryani rice, bread pudding, roasted lamb, chicken, and more with her broken wrist.

“The injury is permanent. Her grip is so weak. That was because she was falling and she tried to stop her fall with her hand,” told Laila about her mother’s broken wrist to Says.

Look at the injury of the hand of Laila’s mother.

Laila’s mother was waiting for her relatives’ arrival from 10 AM to 2 PM after she finished her cooking—but the guests did not show up and decided to cancel on her last minute. Even worst, they gave them irrelevant excuse too.

“Your house is too far into the forest. We were lost. Now we have reached another state. So we are going to other people’s houses first. If we still have the energy to visit you, we will drop by, okay?”

According to Laila, the relatives informed her mother that they will be visiting a day earlier.

“My mom did call them in the morning that day to confirm with them whether they will coming or not, and they said they will come.”

“When I returned home after work, my mother thought it was her relatives. She got up to greet me at the door. Her face was shining when she opened the door, but her smile fell when she saw it was just me,” told Laila in another tweet.

Laila told her mother that the guests are not going to come anymore at this point and she saw the sad look on her mother’s face.

So as a reminder to all of us, make sure to never cancel anything the last minute because we never know how much effort and excitement they put in before meeting us!