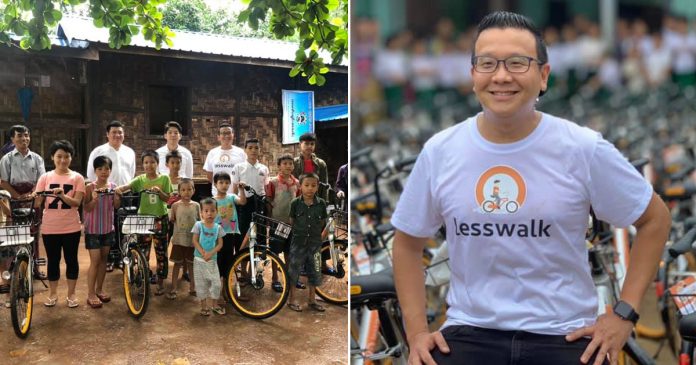 Determined to change the life of poor children in his home country, tech investor Mike Than Tun Win bought 10,000 abandoned bikes for them earlier this year so they don’t have to walk long hours to school anymore.

In his scheme called Lesswalk, Mike wished that the poor students no longer to trudge 10km for two hours to and from lessons. According to Channel News Asia, one of the first 200 children to benefit from the scheme Thae Su Wai shares her experience.

“I’ll have more time to study and play with friends,” said the 11-year-old Thae as she excitedly wheeled away with her new bicycle.

UNICEF estimates 55 percent of children in Myanmar live in poverty, while half of the 17-year-olds enter adulthood with little or no education. With this bike, Mike hopes to indirectly help the children get their education and stay in school longer—so that they can escape from poverty.

On June 19th, Mike updated that 205 bicycles were already sent to two government schools and two orphanages at Hmawbi Township in Yangon, Myanmar and 95 more bikes delivered to orphanages earlier this week.

They experienced a heavy downpour when they delivered the bicycles to the township,

But they were all successfully delivered to the beneficiaries in two large trucks and a box truck.

Each cycle cost Mike around $35 including shipping and distribution. He footed half the bill with the other half coming from sponsors.

“They might not be worth anything in Singapore, but they’re valuable in a poorer country,” Mike emphasized.

Some students, which also includes orphans appeared drenching in rain to collect their bikes.

But despite that, they’re all happy to get new bikes they can use to go to school!

It’s amazing to see people like Mike making amazing changes that will greatly impact our future! Hopefully, more kids are able to make it to school with these new bikes.

Teacher tells mom of non-verbal autistic child what she did in...